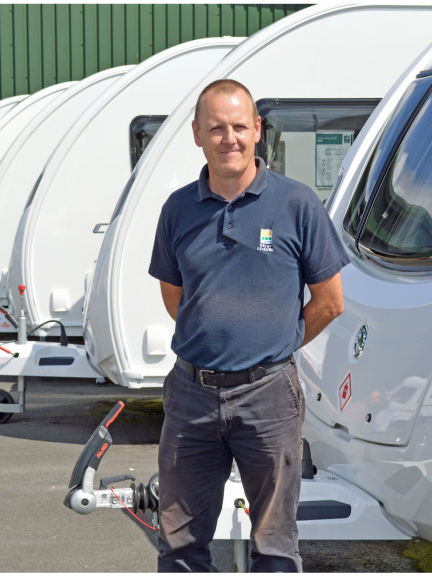 A retained firefighter for the past 25 years has ignited a new career with the customer care team at award-winning Shrewsbury-based caravan and motorhome dealership Salop Leisure.

Peter Furber, 45, the crew manager at Prees Fire Station, is responsible for handing over touring caravans and motorhomes to customers and ensuring that they fully understand how all the appliances inside them work.

Having owned a touring caravan himself for eight years, he already has a good knowledge of caravans and is enjoying his new job. “I am talking to people about something that I enjoy doing,” said Peter, who is married with three children.

He previously worked as a carpenter for 23 years making scenery for theatres that staged professional and amateur productions. The most notable scenery he made was a 16 foot pineapple for a SpongeBob SquarePants promotion for Nickelodeon and he also worked on scenery for the first pantomime at Theatre Severn in Shrewsbury.

Fancying a change of career, he then went on to work as a cook at Morrisons supermarket in Shrewsbury for more than four years before spotting the advert for the new post at Salop Leisure.

The company has created the new post due to increased demand for touring caravans and motorhomes in the first five months of this year.

Salop Leisure’s chairman Tony Bywater said customer care was top priority for the company. “We firmly believe in spending time with customers who make a purchase for us to ensure that they fully understand how everything works before they set off on the road,” he added.

“All touring caravans and motorhomes are linked to mains water, gas and electricity so it’s important that owners understand how they work. We can also arrange towing lessons if requested by customers who buy touring caravans.”