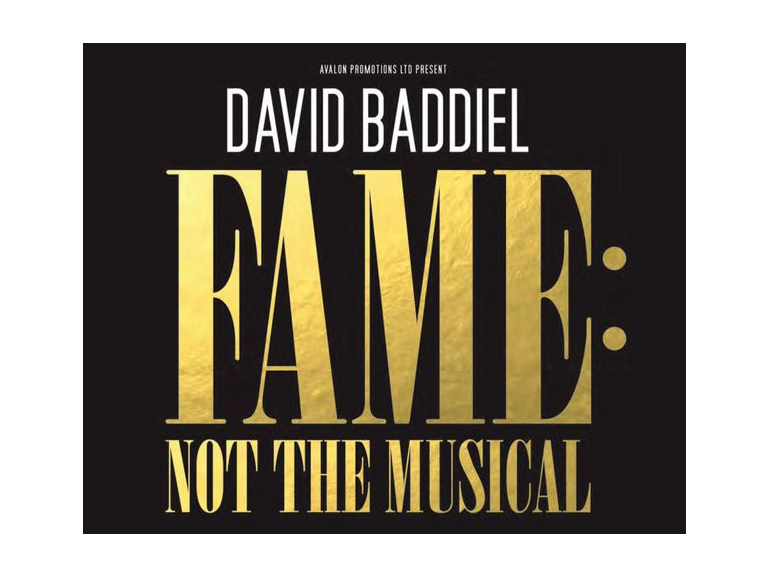 When people think of fame, images may spring into the mind of either glamour and showbiz or pain and misery. With his new touring show, Fame: Not The Musical, David Baddiel tells us about a third way. “In the show, I try to demystify what fame is actually like by talking about the day-to-day mundane bits of the experience. If there is a social purpose to the show, it’s to say that fame appears to be this bauble that people either covet every day or it’s this tragic thing. Well, I’m trying to show how ordinary and stupid and mundane fame can be. It’s certainly an interesting thing that can happen to someone: it can be thrilling but it can also be annoying.”

And so in Fame: Not The Musical, we hear of the celebrity status that Baddiel experiences these days. He is still recognisable to many for his past endeavours with sketch team The Mary Whitehouse Experience and in his double act work alongside Rob Newman (when the pair played Wembley Arena in 1992, it was hailed as the moment comedy officially became the new rock‘n’roll) and Frank Skinner (Baddiel is forever being asked when Fantasy Football will return). But his fame-levels are such that he is also mistaken for other dark-haired and bespectacled public figures (Alan Yentob and Ben Elton for two), sometimes to bemusing or irritating effect but, in Baddiel’s hands, it’s always with hilarious results.

“I’m happier as a person now than when I was on telly all the time. I have children that I really love and I’m happier in my relationships. My life was out of control back then and I’m not a person who is comfortable with that; I’m quite grounded. And I feel more ‘me’ now in terms of writing and performing than maybe I did before. Which is not to say that there aren’t a lot of challenges within that but when you’re more famous it’s easier to get the work you want made. The ideal scenario is that you don’t feel so famous that things seem out of control but there’s enough fame so that people are interested in getting your stuff made.”

Having halted his stand-up career in 1997, Baddiel went on to become a successful novelist (his most recent fiction is 2011’s The Death Of Eli Gold), radio broadcaster (he created the successful  BBC Radio 4 Heresy) and film screenwriter (The Infidel movie which starred Omid Djalili is now being transformed into a musical). But when the chance to step back onto a stage with a mic presented itself, Baddiel gave it a shot.

“When you come back to stand-up after a long time away, it can work to your benefit as you try harder to find a different way into it. About two years ago I did four or five dates and it was fine, I could make an audience laugh, but I wasn’t moving the form on. I was doing what I’d done ten years ago but not so interestingly and then I stopped again.”

But fate can work in peculiar ways, and when Baddiel was invited to deliver a talk in London at a 5x15 event, it helped him find the new approach he had been searching. “For some reason I decided to talk about fame but not like stand-up per se where you’re trying to get a laugh every 30 seconds. I wanted to do a comic narrative about fame and the weirdness of it and what it does to a person. It ended up getting lots of laughs: I was surprised at how many laughs it got. And so I thought maybe this is a way of getting back into stand-up in a way that was different from what I’d done before so I created it as a thematic, long-form, comic narrative rather than just ‘and here’s another funny thing about something’.”

Given his prolonged absence from stand-up, Baddiel is in an ideal position to spot the stark differences between the scene today and when he was cutting the comedy rug in the 90s. “When I was walking around Edinburgh last August and looking at posters, I saw an awful lot of young men who seemed like not quite the most handsome boy in One Direction. The hair in particular among comedy men is very gel and very boy band. That doesn’t mean that they are rubbish: I don’t think you can prejudge on the basis of hair. Of course some people blame me and Rob Newman for that anyway.”

When it comes to analysing his own legacy to the British stand-up form, he sees both positive and negative elements. “No one had done an arena before us, and now that is de rigueur for some very successful comedians. And no one had been presented in an NME kind of way. Comedy was a little bit too serious and too worthy at that point, but then we came along to say that it doesn’t all have to be about politics, some of it can be about pop music and sport and sex. That really did change comedy in a good way and presented it to a younger audience. What it also led to, though, was the homogenisation of a particular type of young, good-looking, male stand-up: some are good, some not so good, but there are probably just too many of them.”

Baddiel is certainly happy to be back in the stand-up fold once more, but he has plenty other projects keeping him going just now. He’s just given the green light for a Channel 4 pilot of sit.com which aims to show how the modern family copes in this uber-technological age. “TV seems a little frightened of screens; they will have the odd screen in the odd scene, but I’m sitting here now with three screens around me: a mobile phone, a computer and a laptop. My partner is upstairs and I’ve sent her an email this morning about the shopping. My feeling was that if we just look at the internet in terms of a social network or this big grand thing, then we miss the way where it is actually changing our lives which is very small and very domestic. That’s what Sit.com is about.”

As well as adapting a musical version of his movie, The Infidel, he has an upcoming Radio 4 show, Don’t Make Me Laugh, in which comedians desperately try to talk about inherently funny subjects without getting a laugh. There’s also a children’s book in the works and he’s penned an episode of the rebooted Thunderbirds, which is slated for transmission on ITV in 2015 (“it involves Parker in a big way, but that’s all I can say”).

But for now, Baddiel is looking forward to his stand-up tour and once more making a strong contribution to what he believes is the most vital live artform. “It’s the only one with a direct audience response which gauges whether or not it’s succeeding. I’m sure we could all name comedians who we think have got away with being praised and don’t deserve it, but the truth is that no one is successful in comedy without being able to make an audience laugh.” By that clear-headed formula, David Baddiel is destined for a very successful 2014.