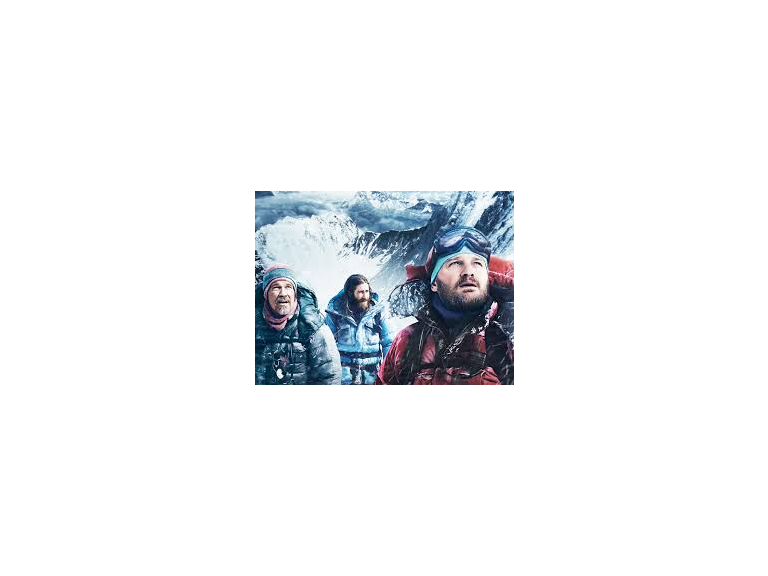 Firstly, I loved it, secondly, it's not an easy ride this film. I pretty much loved everything about it (despite reading reports by the real life journalist who was on the trip the film depicts that it's all rubbish - that's Hollywood for you and his personal view,) but make no mistake, I came away with absolutely no desire whatsoever to ever even think that climbing Everest would be any type of fun.

This 'true-life' survival thriller, tells the tale of  the catastrophic blizzard that claimed the lives of eight climbers and guides on the world’s mightiest peak in 1996. The film is highly successful in it's mission to make you feel as if you’re really there, scrabbling for safety - infact I can't believe the actors didn't really summit Everest while they were being filmed.

Numerous characters make their way up the rock, each with their own lightly sketched motivation and colour-coded jacket else we would have no hope of recognising who was who through the storms. The performances are all brilliant and watchable and there is a touch of the independent about the film despite it being a blockbuster in the filming techniques and the way we don't get too close to any individual emotionally.

The closest it has to a main character is Rob Hall (Jason Clarke), whose tour company Adventure Consultants started running commercial expeditions up the mountain in the early Nineties. And he is brilliant. He has made the his character perfectly loveable so you really root for him.

By the time the film begins, Everest is a serious tourist hotspot- for people who can pay experienced guides the huge amounts required - $65, and the heavier foot traffic is slowing the ascent and increasing wear and tear on the equipment. In an early terrifying sequence, a ladder across a gorge shakes loose, leaving Beck Weathers (Josh Brolin), clinging on for dear life and understandably disgruntled about paying to play with his life (his choice!)

Everest is a great landscape film – the mountain looks by turns like a silty ocean floor and the sulphurous crust of an alien planet – and director Kormákur’s camera lingers on stunning views creating real scale and spectacle.

The film’s main point of contact with its audience is the eminently sensible Rob – and we are reminded that his job isn’t just to take people up the mountain, it’s to bring them safely down again. The swaggering anti-hero part is mostly left to Jake Gyllenhaal, resplendent in yak beard and man bun, as rival tour operator Scott Fischer.

Emily Watson puts in a strong shift as Base Camp’s mother hen, but as Rob’s anxiously pregnant wife back home in New Zealand, Keira Knightley spends 95 percent of her extremely short amount of screen time ashen- whispering and crying (very convincingly) into a cordless phone, and as Brolin’s equally sidelined spouse, Robin Wright almost hits the full 100. I didn't miss the presence of women - the film is about what it is. Heartbreakingly so.

Coming up at Cineworld Shrewsbury are other big titles including The Martian, Suffragette, Sicario and Macbeth.

A Right Royal Week of Fun at Park Hall

The Hive's Street Festival 2022
Sign up for offers
Sign up for what's on guide
Become an author
Popular Categories
By clicking 'ACCEPT', you agree to the storing of cookies on your device to enhance site navigation, analyse site usage, and assist in our marketing efforts.
For more information on how we use cookies, please see our Cookie Policy.