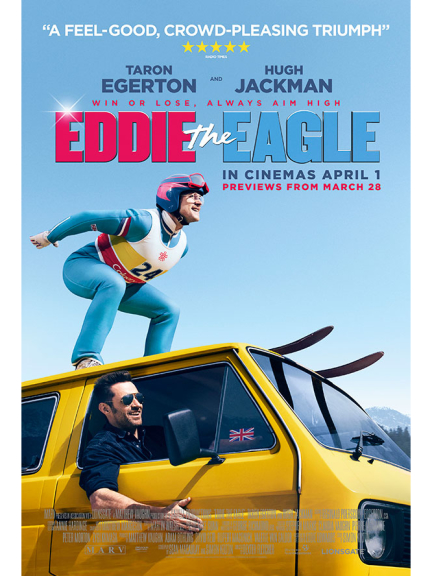 If you’re looking for a sugar-sweet, very funny British comedy, then we can highly recommend Eddie the Eagle. We went to Cineworld Shrewsbury to see it this week and it was excellent!

With so many appalling things happening in the world and on the news at the moment, it really is a welcome relief to go to cinema for a few hours of blissful escape and see something so uplifting and positive. That being said, the film might be too sweet for some, but we, and everyone else in the cinema, seemed to find it really enjoyable.

Like the real-life inspiration, Eddie the Eagle (2016) is a total underdog story. Eddie Edwards is a kid who’s got bad knees who is always in and out of the hospital. His school mates pick on him and he’s got an unsupportive dad, but despite it all Eddie has an impossible dream: to ski at the Winter Olympics.

Based on a true story

The film is of course very loosely based on the real Eddie ‘The Eagle’ Edwards and his famous ski jumps at the Calgary Winter Olympics of 1988. Young Taron Egerton, who plays Eddie the Eagle, is fantastic and though Hugh Jackman’s coach character Bronson Peary is totally fictitious, he brings some real energy, humour and pathos to the film. There’s even a cameo by Christopher Walken!

The director, Dexter Fletcher, does an amazing job recreating some of the ski jumps which look absolutely terrifying. What really comes through in the film is the fact that Eddie the Eagle was brave enough to get on top of a 90 metre ski jump in front of millions of people. At the end of the day, it’s a genuinely funny, feel-good story about triumph over adversity and that’s what us British love.

All in all, we can highly recommend it this great PG-rated family film. It’s definitely worth a watch at Shrewsbury Cineworld, so see it while you can!