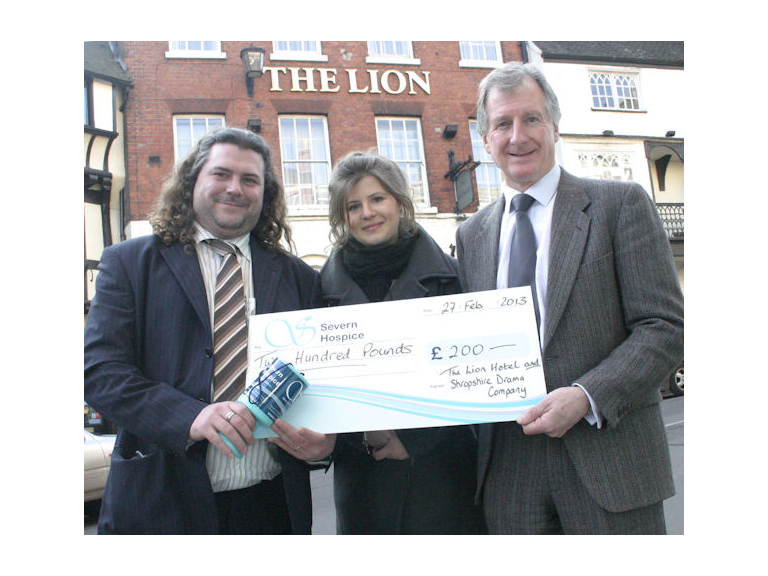 A Valentine’s Evening hosted by Shropshire Drama Company in conjunction with The Lion Hotel Shrewsbury has raised £200 for Severn Hospice.

The event which took place in the hotel’s Hayward restaurant on Friday 15 February was attended by 40 people.

Diners, who arrived to a champagne reception, followed by a four-course meal, were treated to a number of romantic poetry readings and live music throughout the evening from members of the company.

Tickets were £35, £5 of which was donated to Severn Hospice.

Shropshire Drama Company (SDC) is an amateur company of enthusiastic actors, artists, creative & technical people whose aim is to bring challenging and innovative theatre to the people of Shropshire, originally founded by the former county drama and arts adviser the late Bert Amies, OBE.

SDC aspires to provide its audiences with high quality performances covering a wide genre of plays. Apart from offering its members the chance to be involved in plays at a variety of venues, there is the chance to develop skills in various aspects of theatre through a programme of workshops, and the chance to enjoy regular monthly play readings, and other social activities.

In recent years SDC has staged the following productions: Henry IV (Part One) in Haughmond Abbey as part of the Battle of Shrewsbury 600th Anniversary Commemorative Festival, The Lion In Winter at the Edge Arts Centre, King Lear, All’s Well That Ends Well, King Richard III, Romeo & Juliet and The Merry Wives of Windsor at Much Wenlock Festival, Inherit the Wind in St. Chad’s Church as part of Shrewsbury’s annual Darwin Festival, A View From The Bridge at Concord College and Ellesmere Arts Centre, as well as She Stoops to Conquer, Hay Fever and Creditors at Shrewsbury’s Theatre Severn.

For more information, contact Neville Street of Stella Six PR firm based in Shrewsbury on 01743 246917.