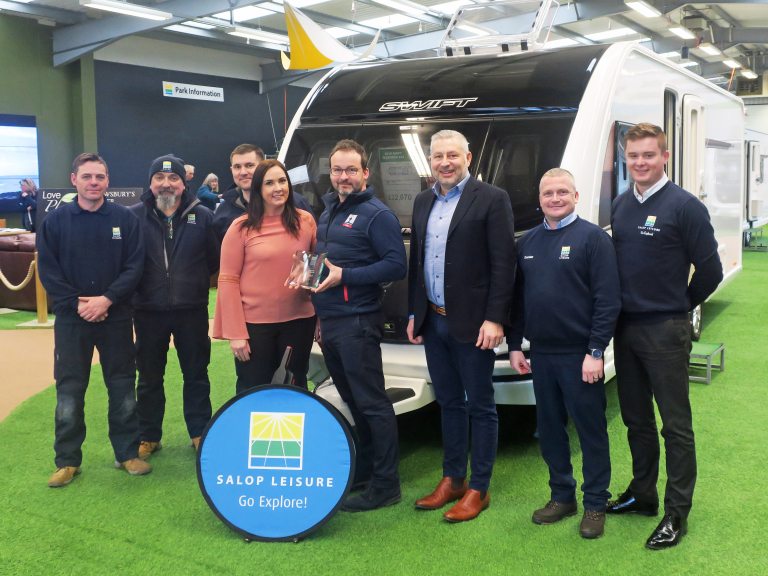 The Shrewsbury-based company is the only dealership in the country to have won gold awards in both the new and pre-owned caravans categories. It’s the second year running that Salop Leisure has scored double gold awards, which require an average satisfaction score of 80% or over.

The awards are based on the response to a survey by readers of Practical Caravan magazine and members of The Camping and Caravanning Club which identified the dealers best to buy from in the view of touring caravan owners.

Mark Bebb, Salop Leisure’s managing director, revealed that the company had won gold awards in six of the last 10 years and he thanked customers for their loyal support.

“We are delighted that our customers have voted in our favour again,” he said. “However, I still believe that we have a huge amount of work to do as an industry to drive forward customer service improvements.

“It’s an honour for the company to win these awards, but we are just part of the caravan supply chain.”

An awards spokesman said: “Practical Caravan magazine readers and The Camping and Caravanning Club members can be sure our findings are based on the collective wisdom of many owners and give a firm indication of the typical experience of owning a particular brand of caravan.

“Brand new caravans with all the latest features and technology are great, but we want to be sure that anyone shopping for a pre-owned caravan gets the same enjoyment and an equally high level of customer service.

“The best caravans are only as good as the dealer network that stands behind them.

It's easy to be ready with a smile and a cuppa when someone's wallet is twitching. What's more important is to be as helpful and willing when something goes wrong.

“The best dealers are there for their customers in bad times as well as good, and attentive customer service and a willingness to listen go a long way. A friendly and efficient dealer can make a huge difference to the ownership experience.”