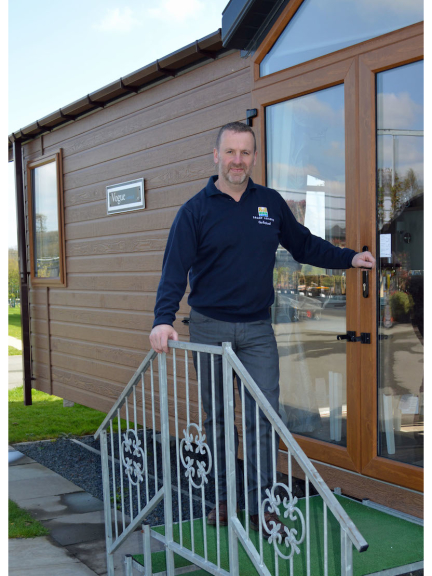 A director of an award winning caravan and motorhome dealership is celebrating 35 years’ service to the company.

ony Cooke, 51, has grown with Shrewsbury-based Salop Leisure, starting as trainee engineer and progressing through the ranks to after sales director in charge of a team of 12 engineers who together clock up 250,000 miles a year travelling to caravan parks from Oxford to the Mid Wales coast.

He joined the company on April 15, 1980 straight from Harlescott County Secondary School, Shrewsbury, after being interviewed by current chairman Tony Bywater.

Mr Cooke initially worked on touring caravans for 12 years before moving to the company sister dealership in Cosford as touring after sales manager for eight years. He then returned to Shrewsbury to become after sales manager for caravan holiday homes and has been based at the company’s Emstrey headquarters since it moved from Meole Brace in 2006.

Working for Salop Leisure has become a family affair for the Cooke family, as his wife, Lynda, is accessories shop assistant and his youngest daughter, Georgia, also works for the company in the school holidays.

He credits Trevor Bebb, father of managing director Mark Bebb and Evan Capes, who has now retired, with the guiding influences during his early years with the company.

“The work can sometimes be stressful but I do genuinely love my job,” he said. “It’s a unique job that involves a diverse range of work. One minute we might be putting a roof on a caravan or connecting gas and the next we are helping to set up for a major show.

“I am very much a hands on person and I enjoy working with my team.”

Reflecting on his 35 years with the company, he said: “I have seen massive changes in the caravan industry and at Salop Leisure over the years as the company has successfully diversified.

“The success is down to Tony Bywater, a very professional businessman for whom I have the utmost respect. I have learnt so much from him.”