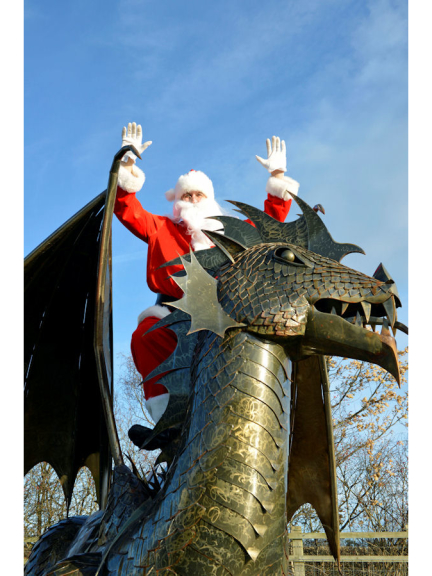 Christmas shoppers in Shrewsbury could hardly believe their eyes when a huge Welsh dragon appeared in the town centre with Father Christmas.

The eye-catching 16-foot long, 11ft high and 10 ft wide metal dragon was carried on a transporter through the streets of Shrewsbury to The Square to promote Christmas shopping.

Award-winning caravan dealership Salop Leisure, which has sales centres at Emstrey, Shrewsbury, Machynlleth and Stourport-on-Severn, has brought Dewi the dragon from his home on the Cambrian Coast for a winter holiday.

He’s going back to his creator, Marche Studios at Ford, near Shrewsbury, for general maintenance and repainting before flying back to his home, guarding the entrance to the five star Min-y-Don Holiday Home and Touring Park in Harlech, next spring.

Dewi became a major tourist attraction when he was initially based at Salop Leisure’s roadside headquarters at Emstrey and has been popular with visitors to Harlech since 2011.

The dragon took 732 hours to be crafted and comprises 2,500 different sized scales welded onto a frame. The scales, cut from 78 square metres of sheet metal, were polished and given 12 coats of lacquer. Now it's time for Dewi to have a makeover.

Salop Leisure’s chairman Tony Bywater said: “Dewi looks fantastic set against the backdrop of Harlech Castle, which is a World Heritage site, but he deserves a rest after guarding the park for three years.

“We thought it would be good for him to enjoy a spot of Christmas shopping in Shrewsbury with Santa before he goes for his makeover. He had a very enthusiastic response from shoppers when we drove Dewi through the town.”

Dewi’s companion, Santa, will be available in his grotto at Salop Leisure every weekend up to Christmas from 10am to 4pm, including December 23 and 24.

In addition there will be children’s entertainment on December 15, 16, 22 and 23 and the Salvation Army Band will be playing from noon until 2pm on December 6 and 13.