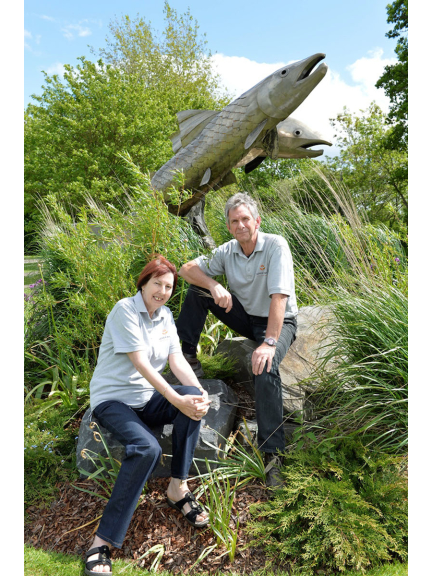 The popularity of a picturesque, five star caravan holiday home and luxury lodge park, which overlooks the River Severn on the Welsh border, has persuaded the owners to create an extra 20 pitches.

The expansion project at Seven Oaks Holiday Park at Crew Green, between Shrewsbury and Welshpool, which boosts the number of pitches to 130, is expected to be completed by the end of June.

The 20 new pitches are located on an elevated terrace overlooking one of two coarse fishing pools on the park. There are also plans to build a pavilion alongside a bowling green on the park with both projects representing a £500,000 investment.

The park is especially popular with caravan owners from the Midlands and North West England who have exclusive use of a gymnasium, fishing pools and bowling green as well as angling on the River Severn.

Park managers Ron and Margaret Brace explained that the carefully planned expansion was due to demand for pitches on the park, which enjoys fine country views and is a wildlife haven.

Originally from the Black Country, Mr and Mrs Brace said: “We are not just selling a caravan holiday home here, we are selling a new way of life. Buying a caravan does change your life for the better and we know how important it is for people to find the right park.”

The couple was born and brought up in the Midlands – Ron in Wednesbury and Margaret in Darlaston. They ran a successful restaurant, Elliotts in Codsall, for seven years before moving to Wales after buying The Willows restaurant at Llandegla and then became managers of a holiday home park near Bala.

“Wales was always our bolt hole when we wanted to escape from the Midlands,” explained Margaret. “All Midlanders feel an affinity with Wales because we were taken there from childhood.

“Midlanders love this area because it’s an escape from the rat race, traffic jams and built up areas to the peace and quiet of the beautiful countryside. Light pollution in the Midlands means that you don’t really see the stars at night, but the sky always seems much bigger here.”