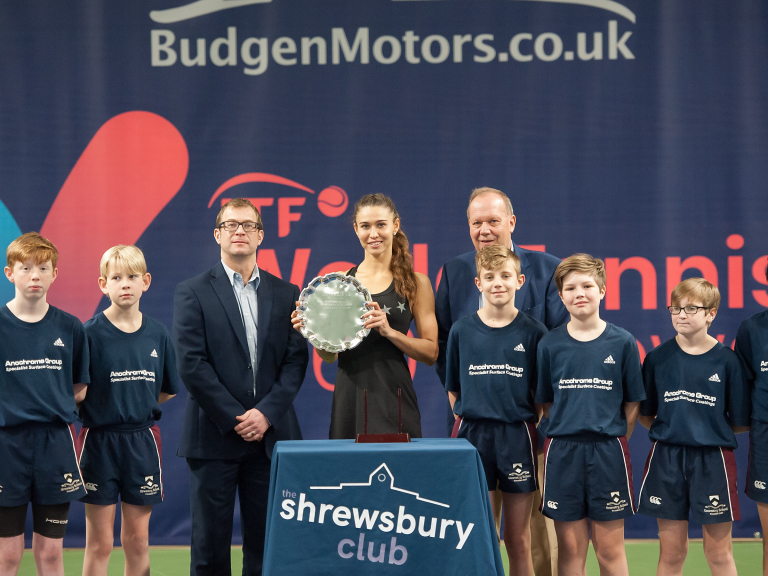 The Russian star eventually ran out the 5-7, 6-1, 6-4 winner against Belgian ace Yanina Wickmayer to be crowned champion of the prestigious $60,000 event in front of a capacity crowd of around 500 at The Shrewsbury Club.

It was a second successive title for Diatchenko, 28, after winning a $25,000 tournament in France last week.

Wickmayer, 29, responded well to the disappointment of defeat to partner Arina Rodionova to victory in the doubles final later in the afternoon with a straight sets victory over British player Freya Christie and Valeria Savinykh.

But it was singles title glory for a delighted Diatchenko, the second seed, as she produced an excellent performance to get the better of top seed Wickmayer.

A close final was always likely given the players are currently next to each other in the world rankings, with Wickmayer just one place higher at 126, and that’s exactly how it played out.

Wickmayer, the former US Open semi-finalist once ranked as high as 12, fought back from 5-3 down in the opening set to take it 7-5 - but Diatchenko hit back in style to claim victory.

She said: "I'm really happy I can win today because it was a very tough, very intense, very physical, intense match for both of us.”

Diatchenko, who beat Maria Sharapova at Wimbledon last summer on her way to reaching the third round, revealed it was the first time she had managed to win back-to-back titles, adding: “I proved my level and my ranking and everything. I had a goal for these couple of tournaments and I did it.”

Wickmayer was quickly back on court as she teamed up with Australian Rodionova to beat Christie, from Nottinghamshire, and Russian player Savinykh 6-2, 7-5 to take the doubles prize.

"I think we did well,” said Wickmayer. "It's our second time playing together and our second final, so I think we have to play more in the future.”

Dave Courteen, the managing director of The Shrewsbury Club, stressed the quality of the two finals was a fitting end to an exciting week of tennis.

He said: “The singles final was amazing and the quality of the tennis was so high. I was speaking to one of the senior LTA representatives and he said the quality was just like you would see in a $250,000 WTA event.

“It was so close and could have gone either way. It was an incredible finale in front of a sell-out crowd to what’s been a fantastic week.

“It’s been a really successful tournament and we are delighted with how it’s gone. It was a big undertaking for the club to stage a tournament of this size, but the hard work of our team, an army of volunteers and our sponsors has helped make it a real success. We really hope it’s something we can bring back to the town."

Julie Piper, the tournament director for the Lawn Tennis Association, added: “It’s been an excellent week. There’s been a great team of volunteers who have been really welcoming and that set the tone from the moment the players arrived.

“The stadium court set, everything that Dave Courteen has done has been brilliant. He’s so enthusiastic and the players have been happy with everything.

“It’s been a very happy week and I’ve also liked the evening play because it’s given people the opportunity after work and for children after school to come in and see the tennis.”

The next professional tournament at The Shrewsbury Club will be a $25,000 men’s event in September.