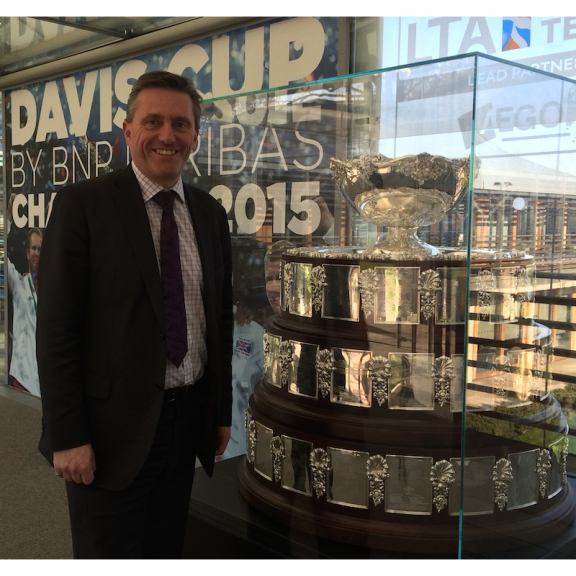 Millions watched Andy Murray inspire Great Britain to Davis Cup glory in November - and now the iconic tennis trophy so memorably won in Belgium is heading to Shrewsbury next month.

The Shrewsbury Club, which has developed strong links with the Lawn Tennis Association, has successfully arranged for the towering trophy, one of the most famous in the sporting world, to visit the town during the Aegon GB Pro-series men's event, which takes place at the club between February 13 and 20.

It will be the first time the Davis Cup has left the LTA's London headquarters at Roehampton since Great Britain lifted it for the first time since 1936 thanks to the heroics of Murray and his team mates in beating hosts Belgium in Ghent.

Delighted Dave Courteen, the managing director of The Shrewsbury Club, said: "The LTA are very committed to getting the Davis Cup out and around the UK and this will be the first time it's left their offices at Roehampton since the trophy was won in Ghent.

"It's an absolute coup that the first time the Davis Cup has left the LTA it's coming to Shrewsbury - and we're really proud of that fact. It's brilliant for the town and The Shrewsbury Club and we are going to work closely with Tennis Shropshire to ensure as many local people see it as possible while it's here."

The Davis Cup will arrive in Shrewsbury on Friday, February 19 and there will be a number of opportunities for locals to have a photograph taken with the silverware.

"It will be here for the last two days of the Aegon tournament, February 19 and 20," added Dave. "It's going to be at The Shrewsbury Club on the Friday morning and also the afternoon for a cocktail reception ahead of our sports dinner that night.

"In between it will go to the University Centre Shrewsbury where they are working together with the Shrewsbury BID team to stage a lunchtime event to welcome it into the town.

"There will also be plenty of opportunities for people to see it the next day as we'll have our fun Tennis Factory equipment set up in The Square on Saturday morning when any child is welcome to come along and have a hit.

"They will be given a voucher which will enable them to go through to stop. coffee shop at the Shrewsbury Museum and Art Gallery where the Davis Cup will be for the morning.

"They will have the chance to have their photograph taken with it while there will also be an option to sign up for various tennis coaching courses around the county if the Davis Cup success and all that's happened with British tennis recently has inspired them to play.

"The trophy will then come back to The Shrewsbury Club at lunchtime for our VIP lunch ahead of the Aegon Pro-Series final on the Saturday afternoon."

Dave added The Shrewsbury Club is eagerly looking forward to the return of professional tennis to the town and the start of the search for a successor to last year's winner Quentin Halys, the rising French star who shone against world No 1 Novak Djokovic in the second round of the Australian Open in Melbourne last week.

Admission will once again be free for spectators throughout the Shrewsbury tournament.