Caravan engineer David Cheshire has been converted from a motor rallying spectator to a competitor thanks to a little help from his employer.

When he’s not working on caravans in the workshops at award-wining dealership Salop Leisure in Shrewsbury, you will often find him fine tuning and racing his 2.8 litre BWM 3 Series, which delivers 225 bhp.

A member of Long Mynd Motor Club, David has been rallying for only three years and competes in single venue events. He hopes to progress to a championship in the future after gaining more experience and attracting more sponsors. 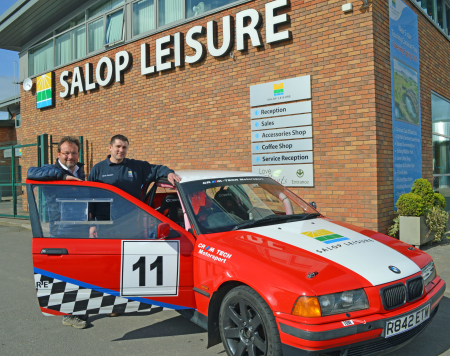 His best result to date is a third in class for cars of two litres and above, although he did receive an award for first mixed team to finish the Agbo Stages Rally held Weston Park last year when he had a female co-driver.

Sitting alongside him this year is Chris Page from Telford and his sponsors are Salop Leisure and CR M-Tech of Hadnall, which is run by a friend, Chris Ransley, a fellow rally driver.

“Having watched rallying for many years, I wanted to have a go,” he explained. “To compete at high level it has become very expensive and I do it more for fun. Eventually, when I have competed in a few more rallies, I will consider entering a championship.

“I would like to get a first in class and eventually win a rally but that’s probably a long way off at the moment.”

David, who worked as an MOT tester for 15 years before becoming a caravan engineer, thanked Salop Leisure for the company’s sponsorship.

Salop Leisure’s managing director Mark Bebb wished David success in his chosen sport. Because the company believed it important to invest in the health and fitness of its staff, it has a running club, yoga club and cricket, football and motorcross teams.

“We are a small, family focused business that genuinely cares about the health and wellbeing of our employees,” said Mr Bebb.