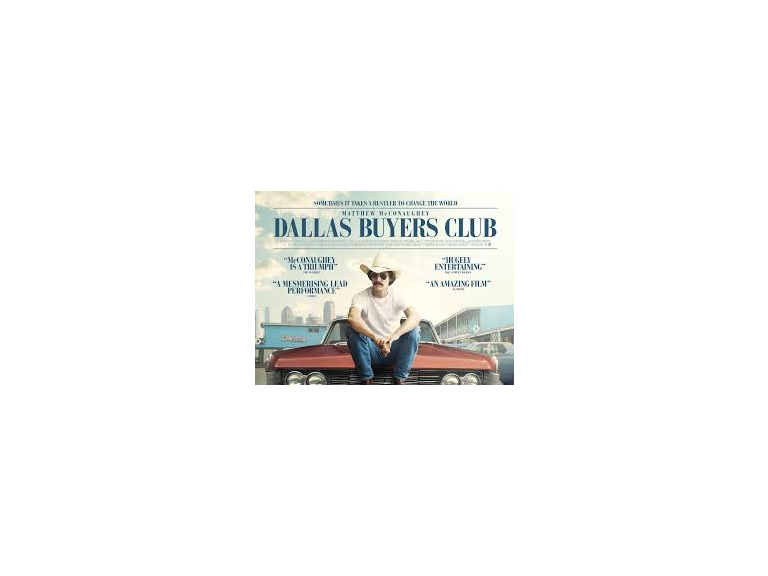 I had wanted to see this film at Cineworld in Shrewsbury for a while and it was one of the best films of the last few years by far, with astounding performances from the two leads.

For me, the film can be summed up by two smiles. The first is a smile that Jared Leto's transgender character Rayon gives Ron Woodfruff (played by Matthew McConaughey) after he accosts his homophobic ex-friend for refusing to shake hands with Rayon in the supermarket. And the second, the smile that Ron gives his 'colleagues' and 'friends' after his fails to win a lawsuit to be able to self medicate himself as he slowly dies from Aids after contracting HIV. Despite the fact he failed in a court of law, he had several victories and changed history.

This film and true story, famously has a 23-day shooting schedule and a laughably low-budget by Hollywood standards. Yet it can only be viewed as a masterpiece and you can tell that blood, sweat and tears went into by all involved and not just on an artistic level. Despite it's very heavy subject, chronicalling a heterosexual and homophobic bull-rider from Dallas, Texas, who contracts HIV and is told he has just 30 days left to live and 'should be dead already'.

Ron of course, leaps shouting on the hosital bed and after very blunty being given his diagnosis by a Dr we come to hate, and declared there is 'nothing in the world than can kill Ron Woodruff in 30 days'.

He knuckles down to some research, finding alternative drug therapies in foreign countries – no mean feat in that preâinternet era and heads to Mexico, where on recahing his 30 day time-limit, is a skeleton and practically dead. McConaughey, slimmed down to this extreme level to portray Ron, as did Leto.

Soon, Ron has set up a buyers' club, niftily sidestepping US Food and Drug Administration (FDA) rules about drugâselling by getting HIV/Aids patients to pay for "membership" in which imported medicines are notionally free.

Through a common cause with the gay guys he used to hate, this former sex and drug addits, becomes an inspirational figure, breaking down the ignorance and general homophobia thereabouts – his own included, which literally melts your heart (cue smile one).

As soon as Ron comes to terms with the fact that 'straights can get Aids, too', and that his sense of identity will not therefore be infected - despite what every 'friend' he has seems to have throw at him, he snaps into action.

In hospital, Ron has a grumpy meetwith transgender woman Rayon, who despite being in there to take part in an AZT drug trial, literally smashes in the screen with such a passionate and perfcet performanse. Obviously, a very unlikely friendship ensues, starting out as merely a business connection to hook up with potential "club" members. The movie is partly about their NonâBrokeback Bromance. And it is beautiful.

Miss this at your peril. It is showing at Cineworld Cinema in Shrewsbury now.

Cinema in Shrewsbury
To see the businesses in our Cinema section, please click here.
Latest Articles