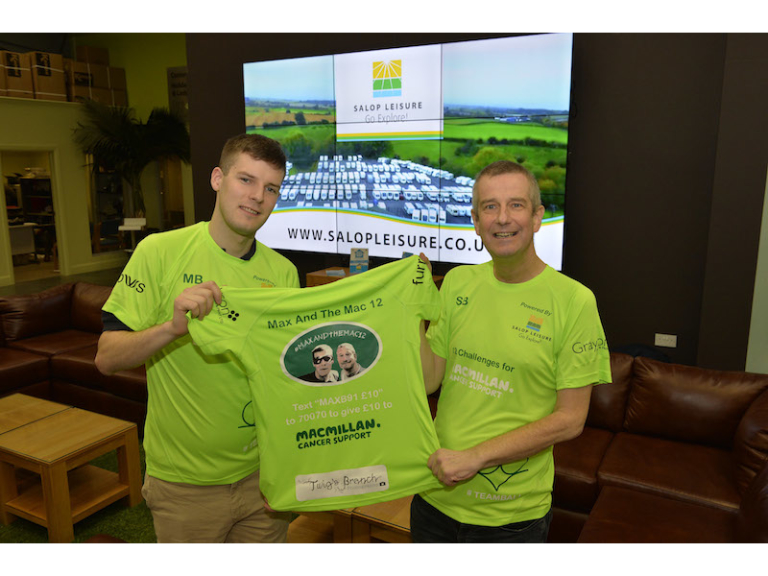 Devastating news of his father’s terminal illness has inspired Max Ball to set himself a major challenge during 2016 with the aim of raising at least £8,000 to Macmillan Cancer Support.

MaxAndTheMac12 will see the 24-year-old from Bayston Hill, Shrewsbury complete 12 different sponsored challenges in as many months.

The challenges begin on Saturday when Max takes on a bungee jump at Tamworth Bungee Club. On February 27, he and a team from caravan dealership Salop Leisure, where he works as a marketing assistant, aim to take on local motor dealership group Greenous in a race to sit on every one of the near 10,000 seats in Shrewsbury Town’s Greenhous Meadow stadium.

Then, on March 26, Max will be joined by workmate Emily Ridge and two friends on the Dash of the Titan mud run in Nottinghamshire followed by a Shakespeare Day treasure hunt in Shrewsbury on April 23 organised with help from Maggie Love of Shrewsbury Heritage, who lives in the town.

Max and a team of workmates will the tackle Shrewsbury Half Marathon on June 19, the National Three Peaks Race in July, white water rafting in Llangollen in August and a 100 kilometre ride at Ludlow Cycling Festival on September 18.

On October 16, Max and Adam Franklin hope to persuade other workmates to join them on the Rough Runner Challenge, which merges distance running with obstacles inspired by popular game shows such as Wipeout and Gladiator.

Other challenges in the planning stage are a bake-off amongst Salop Leisure staff to coincide with Macmillan’s World’s Biggest Coffee Morning on September 30, a foot golf tournament and, to complete the year, a 24 hour squashathon at Kingsland Squash Club, possibly on December 30, where Max plays.

He also hopes to organise a charity challenge football match at the end of May with Salop Leisure taking on another local company.

Max decided to set himself the challenges after his father, Steve, was diagnosed with cancer last October, just two days after they had watched their beloved Sheffield Wednesday beat Arsenal 3-0 in the League Cup.

Initially, the family was told that the cancer was potentially operable and curable, but an exploratory operation in December discovered that it had spread and was now incurable. Steve is now undergoing chemotherapy to extend his life and hopes to see his son complete the challenges.

“In such a difficult time for my family, I felt I needed a challenge to keep me focused and busy throughout this year,” said Max. “The ideas for MaxAndTheMac12 came to fruition whilst all our friends and relatives offered kind messages of support to my dad and family.

“I wanted to do something which would encompass many of the connections both of us have formed during our lives with so many people, be they football fans, poker players, colleagues, squash players etc. All of these people have shown love and friendship to us at this time and I believe we can all work together to make this ambitious project a success.

“We are all working to raise money for Macmillan Cancer Support, a charity that provides detailed information and support for all the different types of cancer which are out there. Cancer should not be faced alone.

“The money raised by MaxAndTheMac12 will help Macmillan to reach more people with cancer and improve the quality of care and support available to them during their cancer journey.”

Helen Knight, Shropshire fundraising manager for Macmillan Cancer Support, said Max was inspirational in the way he was responding in a positive way to a very challenging situation for his family.

“It is truly inspiring how this young man is keeping his family motivated at a time when his dad is fighting cancer they are all under so much pressure,” she added. “Max and his family have my utmost respect. Macmillan Cancer Support’s ultimate aim is that nobody should face cancer alone.”

Anyone wishing to support Max can donate money using www.justgiving.com/MaxAndTheMac12