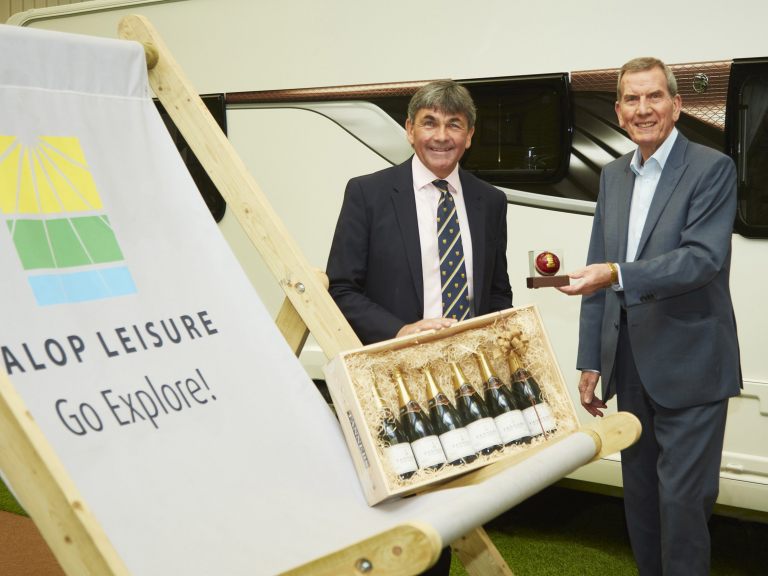 A Shrewsbury-based leisure company has made a presentation to the recently retired Shropshire County Cricket Club chairman to thank him for his “outstanding service”.

Salop Leisure, an award-winning caravan and motorhome dealership headquartered at Emstrey, wanted to thank Toby Shaw for his service to cricket at club and county level.

Mr Shaw, who stood down as club chairman in December, was presented with a cricket ball signed by former England test batsman Kevin Pietersen and six bottles of champagne by Salop Leisure’s chairman Tony Bywater.

Salop Leisure has sponsored and supported county and club cricket in Shropshire for 30 years. Mr Bywater said: “As a company, we have admired the outstanding contribution that Toby has made to cricket in Shropshire. We wanted to show our appreciation of his service to the sport at local and county levels.”

Mr Shaw thanked Salop Leisure for the presentation and for the company’s support of cricket in Shropshire. He said he felt humbled by the support he had received since retiring as chairman.

“I am very proud of the work I did as Shropshire County Cricket Club chairman, a role that gave me tremendous pleasure,” said Mr Shaw, who joined the county committee in 2005 and succeeded Bryan Foulkes as chairman in 2011.

“My focus has always been to encourage and develop young cricketers and it has been pleasing to see so many develop and represent the county, with some also going on to carve out careers in the professional game.

“Good examples are Joe Leach, Dylan Pennington and Ed Barnard who play for Worcestershire. We also helped Ben Sanderson, who came to Shropshire after being released by Yorkshire and now plays for Northants.

"I am pleased to have left the club in a stronger financial position and to have helped establish the Emerging Player Programme to identify talented young players between the ages of 14 and 16 and give them a pathway into senior and professional cricket.”

Aided by a supportive committee, Mr Shaw also established the club’s successful annual hospitality event over the last 13 years, which attracts 700 guests from the Shropshire business community and has raised in excess of £300,000 for the club and local charities.