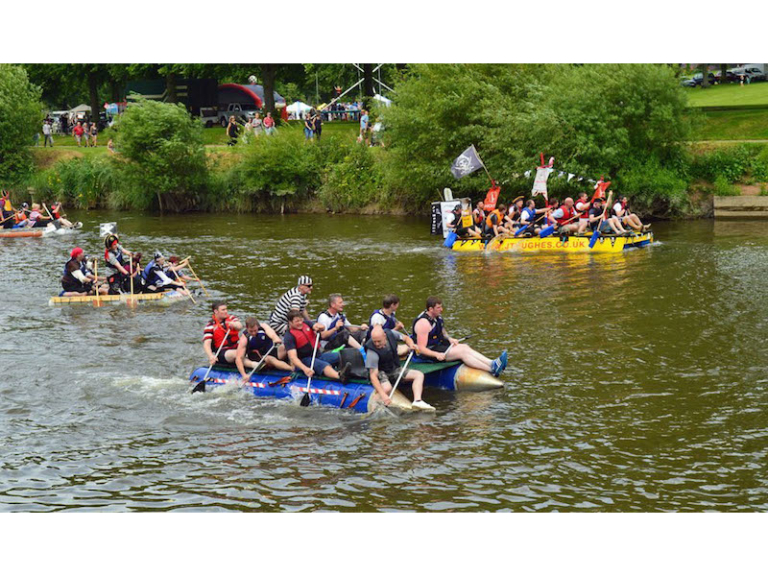 Thirteen teams are set to put their raft building and sailing skills to the test in the annual Morris Lubricants Raft Race for charity on the River Severn in Shrewsbury on Sunday, June 7.

The race, which is part of Shrewsbury River Festival, will raise money for the British Heart Foundation, Morris Lubricants’ adopted charity this year.

The format of this year’s race has changed to make it even more challenging for the teams which assemble in the Quarry Park at 1.30pm. They will be given 75 minutes to build their rafts before launching on the River Severn opposite the Pengwern Boat House.

The teams must then paddle 100 metres upstream to pick up one of their team from the opposite side of the river before heading back downstream to Pengwern Boat House. They must then carry their raft out of river and disassemble it.

The first team to have four pallets and four barrels on a truck will be declared the winner.

Race organiser Phil Gittins, from Morris Lubricants, is delighted with the interest from teams, who must each raise £250 to enter.

“It’s a fantastic, fun event not only for spectators but also for the teams taking part,” he said. “It’s a good way of companies getting together, having fun and raising money for a good cause at the same time.

“We could easily have had a lot more teams but thought we needed to limit the number to a maximum of 13.”

The River Festival, which is organised by Shrewsbury and Shropshire Waterways and Leisure Group to teach people about water safety awareness, is a day of family fun in the Quarry Park and on the River Severn.

This year’s event has a mediaeval theme, inspired by the Battle of Shrewsbury 1403 and the 200th anniversary of the Battle of Waterloo 1815. Families are being encouraging to don fancy dress both on land and on the boats and to take along fog horns, whistles and drums.

The raft race is part of the annual charity fundraising challenge for Morris Lubricants and sister company Morris Leisure. Over the past three years, the companies have raised £44,000 for charities, including the Teenage Cancer Trust, Severn Hospice and Midlands and Wales Air Ambulance Services.

“Adrian was a valued member of staff who died at a very young age and we thought it would be a fitting tribute to him to try to raise a significant sum for the British Heart Foundation. We would love to raise £10,000 this year,” said Mr Gittins.