Footballers from two of Shropshire’s best known companies will get a chance to display their skills at Shrewsbury Town’s Greenhous Meadow Stadium on Friday, April 28.

For the third year running, award winning caravan dealership Salop Leisure in Shrewsbury will take on rivals from Greenhous Group in their annual charity football match, which this year is raising money for playground equipment at Severndale School in Shrewsbury. Entry costs £1 and match kicks off at 7pm. 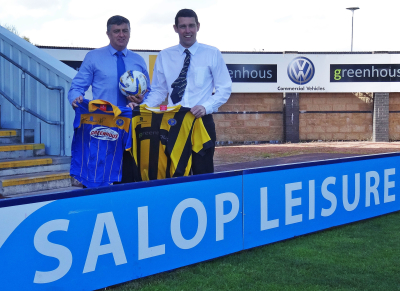 The score to date is 2-0 to Salop Leisure but the men from Greenhous Group won a cricket match between the companies.

Salop Leisure’s chairman Tony Bywater said: “There’s a lot of friendly rivalry between the companies and it’s always an exciting match played in a good spirit. I am sure that Paul Hurst will have a scout watching the match, but let me confirm now that none of our players are for sale!”

Derek Passant, owner of Greenhous Group, said: “These matches are played for fun but with plenty of enthusiasm and no little skill. Playing at the Greenhous Meadow is a dream for the players and their supporters love to soak up the atmosphere of a big stadium. We hope to raise a good sum for an excellent cause.”