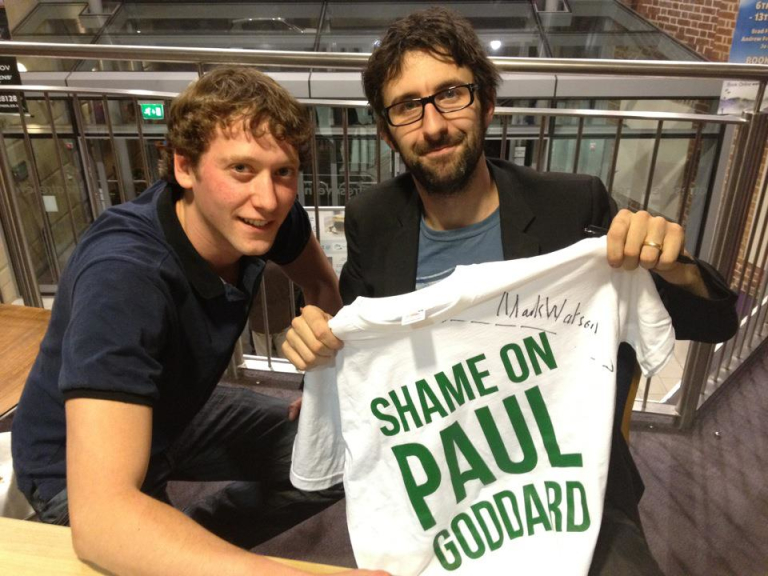 Mark Watson has stood on the stage at Theatre Severn in Shrewsbury twice in the last 12 months. Why? Because in his words, his Shrewsbury gig was one of his favourite of the last year, and so he decided to return!

I also saw him when he performed as the main headline act at Shrewsbury Fields Forever Festival this September. So that's three visits in a year. We must be popular!

One of the reasons why I really enjoy this man's comedy, is that he is incredibly witty without being smutty or replacing every other word with a swear word. Don't get me wrong, he's no saint and he does swear, and often. But he also actually finds more unusual things to talk about and he delivers them in his own unique way.

By his own admission, Mark is quite a shy, quiet, non-confrontational person. This has to endear him to you straight away. I mean, anyone who can stand alone on a stage and entertain you with stories from their own everyday life, and make them really funny, deserves some credit.

I actually met Mark at the festival at the end of the summer. And I can tell you that I interrupted him scoffing a huge hot dog (it's true, he really does eat a lot and just has a fast metabolism), and he was nothing but kind. He was probably thinking "please go away and let me eat before I go on stage in a huge tent", but he didn't show it. Reason to like him number 2. He is actually a nice person.

Reason 3 is that he clearly doesn't perform the same routine month in month out. He had plenty of new material for the people of Shrewsbury, knowing that some of them may have seen him a few months ago. And his responses to heckles are right up there. He really gets involved and is genuinely quick-witted enough not to have to rely solely on his trustworthy material, but is able to have the cheeky back and forth with people.

I like comedians to can turn the mundane occurrences in life - the ones we all suffer, into something amusing. Whether we work in an office, or stand on a stage, as humans we will all encounter some of the same situations, and watching a comedian of Mark's calibre, enables you for a few hours, to laugh at some of the ordinary, or worse - boring and horrible, occurrences in life.

I feel sorry for comedians at the moment. You may have seen or heard that Frankie Boyle has been dragged through the courts for supposedly being racist. He won his case and proved he was not. It's a shame that these funny men and women, the ones we turn to for a bit of light relief from all the political correctness we all suffer, are for the high jump for being there to entertain us.

Mark has little to worry about in this area. No particular group or person really comes under fire in way that could disturb anyone. Except of course for Paul Goddard, who one can only assume is a genuine mortgage advisor who badly let Mark down. Hence, he has (because he is careful and non confrontational) taken legal advice, and has orchestrated a national campaign to shame this man for his 'misdemeanours' against him.

My boyfriend Jack (pictured) and I, won this T-shirt and it is our task to take it on holiday to Vietnam and photograph ourselves wearing it, to add to his national gallery of shame.

We will. And if Mark ever comes back, we will see him again. I hope he does, for those who missed out.

For the latest information and to make bookings for shows at Theatre Severn, please call 01743 281281.