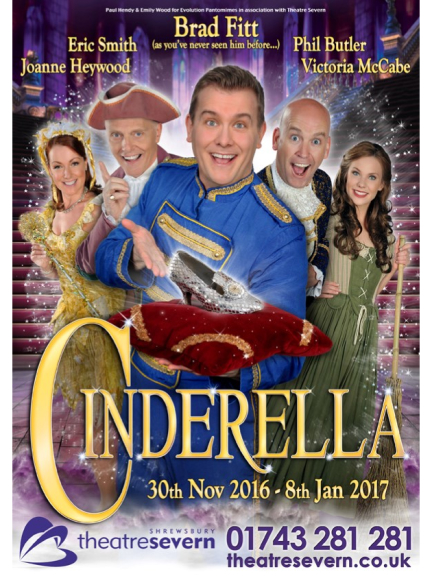 The producers of the 2016/17 family pantomime Cinderella now on at Theatre Severn in Shrewsbury have created panto gold!

Last year's pantomime was almost a complete sell-out and was seen by over 38,000 people, so early booking is recommended - and after the show I caught this weekend, the Theatre Severn manager told specially invited guests the millionth theatre ticket had just been sold!!!! Well done Theatre Severn staff!

BBC Radio Shropshire presenter Eric Smith returns as Baron-Hard-Up, alongside the formidable Ugly Sisters, played by Ian Smith and Matt Danes - who are quite simply outstanding and utterly hilarious. Completing the hugely talented cast are Phil Butler as Dandini, northern lass Joanne Heywood as the Fairy Godmother, Victoria McCabe in the title role, and Ryan Bennett as Prince Charming.

Now, I don't want to give too much away, but I did actually nearly cry with joy at one point, and I won't tell you when or why, suffice to say there is a very magical spectacle in this year's show! I LOVE the Shrewsbury pantomime. Looking around the audience, it's always the one show which attracts everyone from toddlers to grandparents and I never feel shy shouting out to Buttons and chanting the infamous 'It's behind you!'. The perfect tonic and way to start Christmas or the New Year.

But added to the mix this year, is genuinely, in my opinion, the best script and the best cast I have ever seen in our humble town. Sometimes, one of the lead characters is not quite as strong a singer or performer - not this year! Every single one, from the little dancers to Cinderella herself sung, danced, joked and acted their little hearts out.

The set is amazing - so festive and sparkly. I only wish I was five again and could twirl one of the little flashy wands available at the Box Office as I take in the magic coming off that stage! My friend and I had a night off from our babies to enjoy the jokes and songs and we were belly laughing out loud constantly. Well done to the entire team from the backstage crew (enabling some extraordinarily fast costume changes) to the lead actors. Tickets won't be around for long, so make sure you book SOON! Next year's offing is Snow White and the Severn Dwarfs. And I for one CAN'T WAIT!!!!

'SIMPLY HILARIOUS... MUST BE ONE OF THE BEST PANTOS IN THE COUNTRY!'
BBC Radio Shropshire

TICKETS
Blue Performances £11.50 - £15.50 - £17.50 Green Performances £14 - £18 - £20 Gold Performances £18 - £22 - £24 FRIENDS 10% OFF VIEW PERFORMANCE SCHEDULE
Thursday 5 January, 6pm
STAGEXTEXT PERFORMANCE
Open to all, this performance is captioned for deaf, deafened and hard of hearing audiences. Theatre captions are similar to television subtitles, the actors' words appear on a text box placed next to the stage or in the set, at the same time as they are spoken or sung.

Friday 6 January, 6pm
SIGNED PERFORMANCE
Open to all, this performance is presented with British Sign language (BSL)/English interpreting for deaf, deafened and hard of hearing people.

CHILDREN UNDER 2 YEARS Due to capacity regulations, every person attending must be allocated a seat within the auditorium and issued with a ticket, including all children under 2 years. If attending with a child under 2 years, please contact Box Office (01743 281281) for further advice. Please note that pushchairs and mobile child seats will not be admitted to the auditorium.