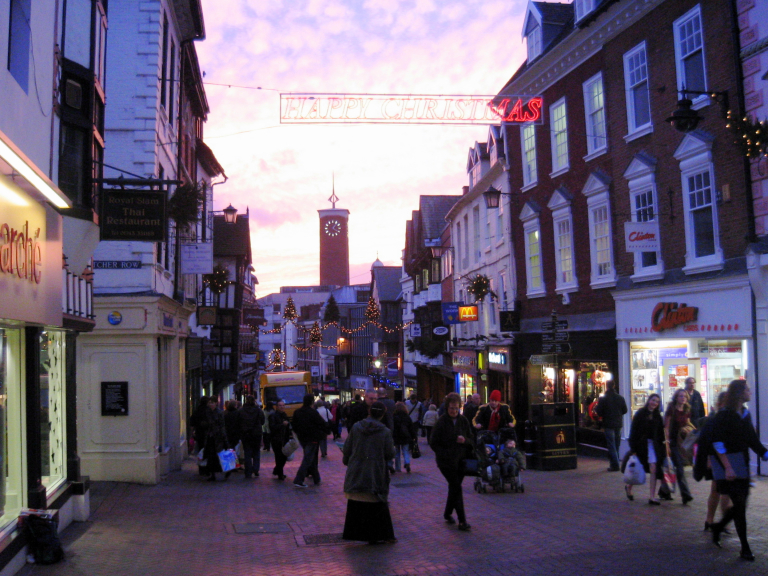 Santa Claus is coming to Shrewsbury! Well, he’ll be everywhere really, but you know what I mean. Yes, Christmas isn’t far away, and whether that thought fills you with tidings of comfort and joy or the deepest of despair, we’ve rounded up some fab festive facts you might not know about.

So take a break from dashing up Pride Hill and admiring the giant lit-up reindeer, pop the kettle on and enjoy these bits of trivia about the most wonderful time of the year…

It is thought that our modern day Father Christmas is a combination of two people, one real and one mythical. The real man was Saint Nicholas, a 4th century bishop of Myra in Turkey, who wore red robes and would secretly give gifts to children. When the Normans invaded Britain they brought the idea of St. Nicholas with them and it was absorbed into the ancient, pagan figure of the Green Man, who represented the coming of spring and wore green.

Saint Nicholas was the first to put presents in stockings! When searching for a place to leave gifts for children, legend says that he used a child’s stocking hanging above the fireplace and afterwards children would hang up theirs, hoping he would visit them that night.

Why do we kiss under the mistletoe? The custom originated in England, with the Druidic tradition of hanging mistletoe in the house, as it was supposed to ward off evil spirits, increase fertility and bring good luck! Historic custom says that a berry was picked from the sprig of mistletoe before a person could be kissed. When all the berries had gone, there could be no more kissing!

The writer who created the Headless Horseman also inspired the iconic image of Santa’s flying sleigh! In an 1819 collection of short stories, Washington Irving described a dream in which ‘the good St. Nicholas came riding over the tops of the trees, in that self-same wagon wherein he brings his yearly presents to children’. The popularity of the stories meant the idea became Santa’s established form of transport.

Although Father Christmas had appeared in red for hundreds of years in legends across the world, in 1931 Coca-Cola played a huge part in cementing the image of the scarlet coat. The American company commissioned a Swedish-American artist, Haddon Sundblom, to paint Santa Claus for their Christmas adverts and he depicted a cheerful, bearded, grandfatherly figure in red clothes. As the adverts spread globally, the image of Father Christmas changed forever, including in Britain where he had traditionally wore green.

Those are just a few of the facts behind our weird and wonderful Christmas traditions. However or wherever you are celebrating Christmas this year, we hope it’s a peaceful one.