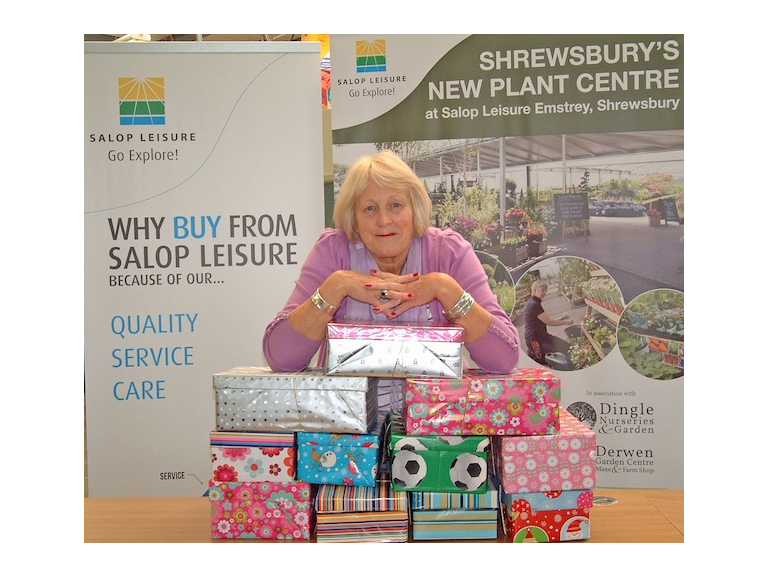 It may be over two months until Christmas, yet the generous people of Shropshire and Mid Wales are already sending “boxes of love” to disadvantaged children in war-torn countries across the world for the festive season.
Jean Courtney, a receptionist at caravan dealership Salop Leisure in Shrewsbury, has already received about a dozen shoeboxes packed with Christmas gifts for children living in extreme poverty.
Jean, who started collecting for Operation Christmas Child 15 years ago, collected around 400 shoeboxes last year and the 2013 appeal to send “love in a box” is starting much earlier than usual due to demand from donors.
She said the generosity and kindness of donors from Shropshire and Mid Wales never ceases to amaze her. She receives shoeboxes in Christmas wrappings from customers, staff, friends, caravan park owners, schools, churches, women’s clubs and many individual donors.
“Every year, the response is unbelievable and shoeboxes are packed with beautiful gifts and a lot of love,” said Jean. “People are already ringing to ask if I’m collecting shoeboxes again this year and hopefully we’ll break out record of 400 boxes.”
Operation Christmas Child, which is run by Christian relief and development organisation Samaritan’s Purse, aims to show that children in need have not been forgotten during the festive season.
For more information please contact Mr Tony Bywater, Salop Leisure chairman, on 01743 282400.
More