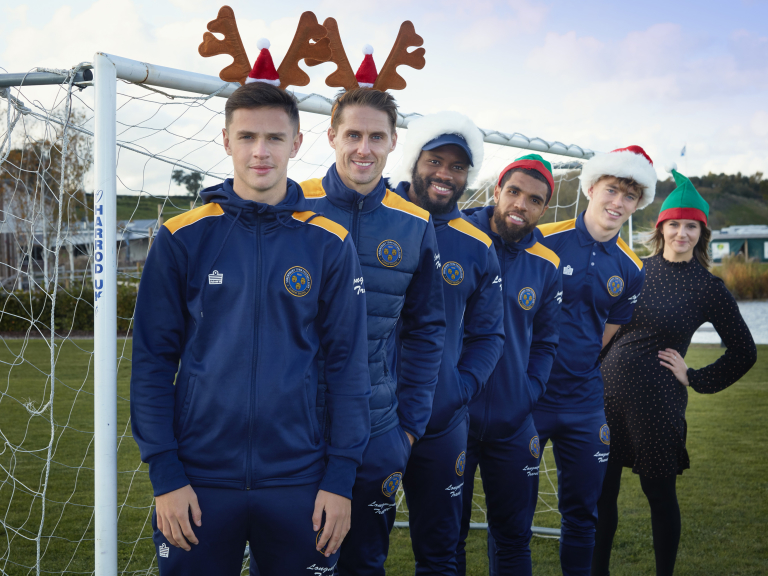 Around 500 adults and children are expected to dress up as Santa and elves for the day to take part in this year’s Salop Santa Dash and Salop Elf Dash in Shrewsbury on December 1.

Money raised from the events, organised by caravan and motorhome dealership Salop Leisure, will go to support the work of Shrewsbury Town in the Community. The charity is independent of the football club, self-funded and needs to raise £1 million a year to deliver 39 different programmes for people of all ages in the community.

The Salop Santa Dash takes Santas along a five-kilometre course which covers the beautiful grounds at Salop Leisure and the company’s Love2Live fitness and wellness centre and Love2Stay resort, where the event starts and finishes.

A festive medal awaits everyone who finishes the course and the entry fee of £12 for adults includes a Santa suit. Salop Leisure is hoping that families, businesses and groups of friends will get into the festive spirit by forming teams to take part.

The Salop Elf Dash, a new addition this year, is designed for children under the age of eight who will have a 1.1-kilometre course to follow to receive their festive medal.

The entry fee of £6 includes an elf suit.

Those wishing to take part in the festive fun may book their places online at www.salopchristmas.co.uk .

Held for the first time in 2017, the popular Salop Santa Dash has so far contributed a combined total of £2,500 to Severn Hospice and the Zac Oliver Appeal.

Salop Leisure’s marketing manager Ed Glover said: “We love to see families taking part together in the Salop Santa Dash and this year, children under the age of eight can choose to do the Salop Elf Dash.

“The Salop Santa Dash is a great opportunity for people of all abilities to get active and have some fun together. What better way for families and groups of friends and workmates to get in the festive spirit?

“It’s also a great opportunity for runners and spectators to see the fantastic facilities we have here at Salop Leisure, Love2Stay and Love2Live.”

Ceri Nicholls, Shrewsbury Town in the Community’s partnerships and events manager, said: “We have been working with Salop Leisure for more than three years and it’s great to strengthen the relationship further by being the chosen charity for the Salop Santa Dash.

“We are really looking forward to being part of the day and to raising funds for the charity.”

The Salop Santa Dash and Salop Elf Dash are part of The Salop Christmas Adventure, a series of events and attractions that promises to be better than ever this year  For full details of the programme, visit www.salopchristmas.co.uk .