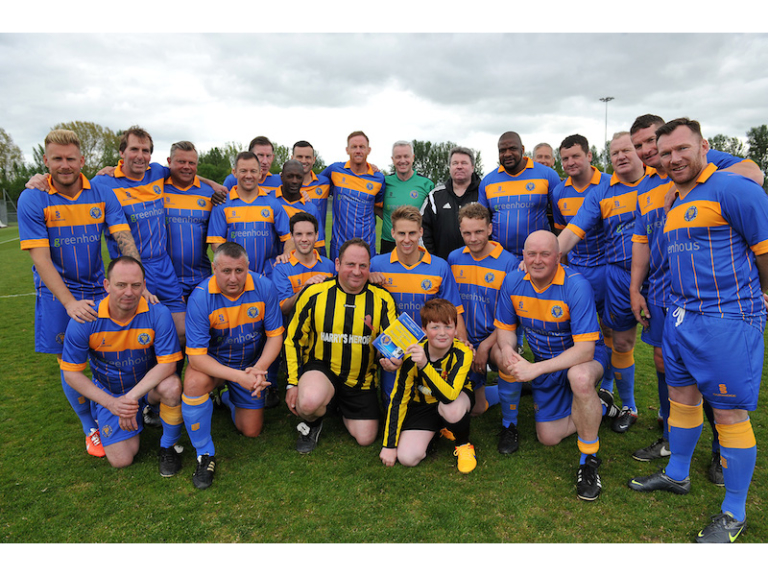 An all-star cast of former Shrewsbury Town players attracted a bumper crowd to the Shrewsbury Sports Village for a special fundraising match in aid of The Harry Johnson Trust.

A crowd of more than 1,500 flocked to the Sundorne venue to watch some of the club's finest players of recent times pull on blue and amber shirts once again.

All proceeds from the match will go to The Harry Johnson Trust, set up by Sally and Stephen Johnson in memory of their son Harry.

The seven-year-old from Vennington, near Shrewsbury, passed away last July after a brave battle against a rare childhood cancer having been diagnosed with Double Hit non-Hodgkins Lymphona.

Sally said it had been a great day and she hopes the match will have raised a figure of around £10,000 to support children with cancer who live in Shropshire and Mid Wales.

"It was an absolutely fantastic day," smiled Sally. " We couldn't have asked for anything more as it was brilliant.

"Whether they were taking part in the game or watching, eveybody really enjoyed it and people have been so generous, so we're so grateful.

"Each player in the Harry's Heroes squad had to raise a minimum of £100 in sponsorship to play and a lot did more than that, so we knew we had raised around £5,000 before a ball was kicked. We were really pleased so many people came long to watch what was an exciting match.

"It was lovely to see the former Shrewsbury Town players chatting to the club's fans in the marquee afterwards and also having a good time with the players from the Harry's Heroes team, a side made up of our family members and friends."

Sally stressed there were so many highlights, but the stand out moment had to be 10-year-old son Eric firing a penalty past goalkeeper Paul Edwards after Football League referee Rob Lewis pointed to the spot for one of the Harry's Heroes side's goals in a high-scoring game.

"It was magical, absolutely magical," she added. "I could just hear Harry up there cheering him on 'come on Eric!"

The Shrewsbury Town Legends squad was assembled by family friend Stuart Dunn, the BBC Radio Shropshire football commentator who has followed the club's fortunes for many years.

"They were all so keen to play and clearly enjoyed themselves," he said. "I'm really grateful to them all for coming along to play for such a brilliant cause as The Harry Johnson Trust.

"It was fantastic to see so many of the club's greatest players of the past in blue and amber shirts again. I've had some lovely messages from many of them since the game finished and they were pleased to be part of such a special day."

Former Shrewsbury star Dave Edwards, whose brother Chris was on the opposing side, added: "It was a special day for such a great cause. Everyone was really excited to see all the ex-Shrewsbury players.

"In the dressing room I was looking at players who were my idols back in the day. It was great to see them all and just watching all their banter was great."