A group of cyclists arrived safely in Shrewsbury on Friday the 10th June after pedalling from Stourbridge en route to Talybont, near Barmouth on the Cambrian Coast.

The cyclists were heading for Islawrffordd Caravan Park to raise money for the West Midlands Air Ambulance and Macmillan Cancer Support. They are due to complete the 110 mile ride by 6pm tonight and took in Bridgnorth, Shrewsbury, Welshpool and Dolgellau along the way. 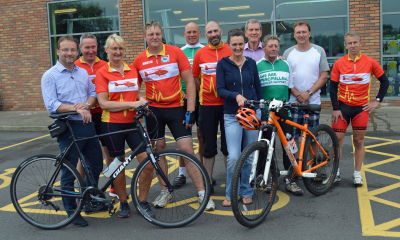 Above: The cyclists pictured with Salop Leisure’s chairman Tony Bywater and managing director Mark Bebb during a drinks stop at the Shrewsbury company.

The ride has been organised by Martin Whelan from Stourbridge to coincide with the sixth anniversary of the loss of his mum, Maureen, who died from cancer. Martin and his family have enjoyed holidays in Barmouth for many years and his mum’s favourite place was Islawrffordd Caravan Park, where the family had a caravan holiday home.

The cyclists hope to raise more than £5,000 thanks to the generous support of sponsors, including caravan dealership Salop Leisure in Shrewsbury, where the riders had their first drinks stop this morning. Salop Leisure’s chairman Tony Bywater and managing director Mark Bebb were there to greet the cyclists who include Jane Evans, wife of Dylan Evans, a director of Islawrffordd Caravan Park.

The other riders include Paul Hupperdine from Talybont, Chris Mcleod from Stoke on Trent, Barry Fisher, Tony Walters and Graham Varney from the Midlands. Jane’s sister, Rachael Garner from Stoke on Trent, is helping Steve Jones in a support vehicle and Paula Tunnadine, a Barmouth fitness instructor, was due to join the riders in Dinas Mawddwy.

Anyone wishing to sponsor the riders can donate online at http://uk.virginmoneygiving.com/fundraiser-web/fundraiser/showFundraiserProfilePage.action?userUrl=thebarmyridetobarmouth

The ride also has its own Facebook page at https://www.facebook.com/thebarmyridetobarmouth/