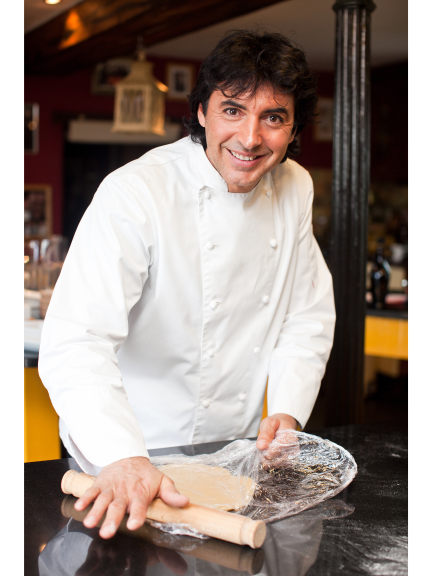 Organisers of this weekend’s Shrewsbury Food Festival have made the surprise announcement that Jean-Christophe Novelli will be attending the festival on Sunday.

The multi-Michelin star and 5 out of 5 AA Rosette winning chef and restaurateur will be giving a masterclass on The Kitchen Depot Cook Along with the Chef Stage. Jean-Christophe, who has catered for Heads of State, Royalty, and renowned personalities around the world, will also give an expert demonstration on The Shropshire Distillery Chef Stage.

Jean-Christophe began his career at the tender age of fourteen as a baker in his hometown of Arras. His life changed completely in 1989 when Keith Floyd asked him to take charge of ‘The Maltsters’, leading to his move to the Gordleton Mill in Hampshire where he won his first Michelin star after only one year. In 1994 Jean Christophe was offered the position of head chef at the Four Seasons Hotel in Park Lane, picking up another Michelin star.

Following several renowned restaurants in London, Cape Town and Normandy, his passion for sharing his talent led him to open his own cookery school, The Novelli Academy.

He has appeared in several TV programmes, most recently as a fugitive on Channel 4’s Celebrity Hunted where millions watched him beat ‘the Hunters’ and raise huge amounts for charity. Earlier this year he was awarded an honorary MBE by Her Majesty the Queen in recognition of his many acts of ‘voluntary and charitable service’.

Director of Fun, Beth Heath, said, “We have been dying to reveal this exciting booking! Novelli is the biggest chef talent we’ve ever had at our food festival, so this is a huge moment for the team. We know our foodie loving visitors will be flocking to see his chef talent in action, and as an extra bonus they will be able to ask him all their burning questions during our ‘Ask the Experts’ panel.

“Having not been able to hold the festival for over 2 years due to Covid, we wanted to make this one unforgettable and securing Novelli is a major coup. It’s great to finally reveal our star booking!”

This year’s food festival also sees the launch of a new Monks Home and Garden Area and a Field to Fork zone educating visitors on the food and agriculture industry.

There will be over 180 food, drink and craft exhibitors and street food vendors, as well as bars to enjoy, a huge kids’ zone with free activities and the Woodings Live Music Stage.

The Shrewsbury Food Festival takes place on September 4 and 5 at Shrewsbury’s Quarry. Discounted tickets can be purchased in advance from shrewsburyfoodfestival.co.uk until Friday, with full price tickets available to buy on the gate.