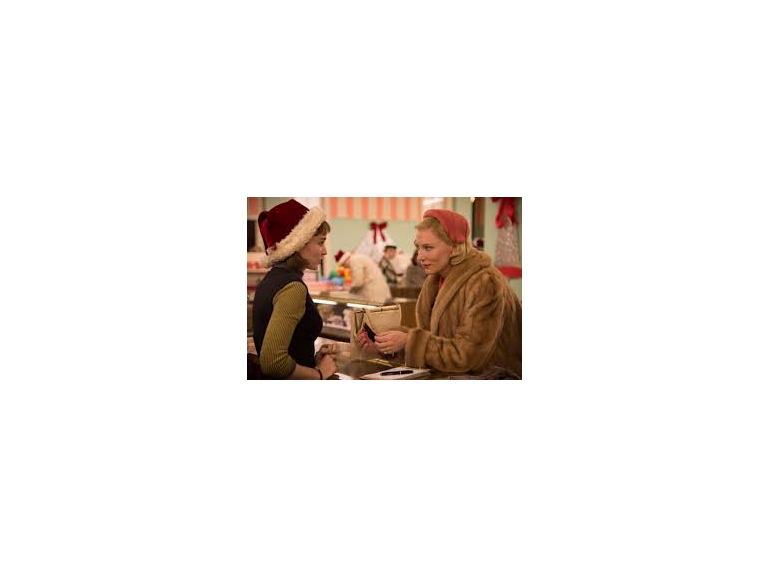 Todd Haynes's latest feature is a subtle, moving and deceptive story of two women (brilliantly played by Cate Blanchett and Rooney Mara) who refuse to live against "their own grain".

Carol is based on a Patricia Highsmith novel The Price of Salt, published in 1952.

Blanchett (who I am not ashamed to say is my favourite actress), can mostly be found in an array of costumes – often draped in a fur coat or brandishing a gleaming cigarette holder and always with immaculately coiffed hair.

Blanchett's Carol Aird is painfully pulling against the constraints of her role as wife and mother. And at times narrowly avoiding brakdown - very contrasting against her perfect poise and decorum at all other times. Expressing her sexual desire for a woman is another way of rebelling against the rigidly conformist world in which she is trapped.

In one of the most telling scenes, in which she has to make a plea to lawyers for the right to maintain contact with her daughter, she shows a defiance and searing eloquence that takes the men around her utterly by surprise, despite only just managing to hold back the tears.

Mara is more subdued as Therese Belivet (what a name!!), a quiet, shy, young woman working in a New York department store who readily admits she 'knows nothing and says yes to everything'.

An aspiring photographer, she hides behind her camera. Softly spoken, dressed in a tartan woollen hat and scarf (the polar opposite to the gradeur and nipped in tailored outfits woirn by Blanchett), she seems to have a passive and sweet-natured personality, and yet she is single-minded in her relationships.

On the face of it, Blanchett's Carol is the dominant one in the relationship: older, wealthier and more experienced. Mara's Therese, though, has an independence that Carol lacks. She is part of a nascent New York bohemian subculture. She listens to jazz, she drinks beer, she is often seen at a party or a bar. She refuses to accept the conventions of an older, more conservative generation.

This is a love story but one with a coolness and a sense of ironic detachment at its core. The most neurotic figure is a man, Carol's husband, Harge Aird (Kyle Chandler), who cannnot bear the idea that his lesbian wife is drifting away from him.

The two women first encounter one another in the store where Therese works. It's Christmas time and Blanchett's Carol is out hunting for a gift for her daughter Riddy.

She leaves her leather gloves behind, thereby giving Therese, who has exhanged not only a meaningful gaze but also a meaningful conversation with her, the opportunity to get in touch, she is clearly looking for a means of escape.

The lovers refuse the roles of victims. Even when they are being spied on during sex, or when Carol is being threatened by her husband's powerful lawyers, neither is ever apologetic. Phyllis Nagy's screenplay emphasises their steeliness and self-reliance.

In sly and subversive fashion, Haynes is laying bare the tensions in a society that refuses to acknowledge "difference" of any sort.

The costume and production design are meticulously detailed but without stifling the searing emotional charge in the film.

Together, Blanchett and Mara make an extraordinarily potent couple.

They are both helped that in Todd Haynes, they have a director who is sensitive to every last nuance in their performances. This is a truly beauiful and delicate film in every way which swirls you up.

Plus, its very festive, so now is the perfect time to catch it at Cineworld Shrewsbury.