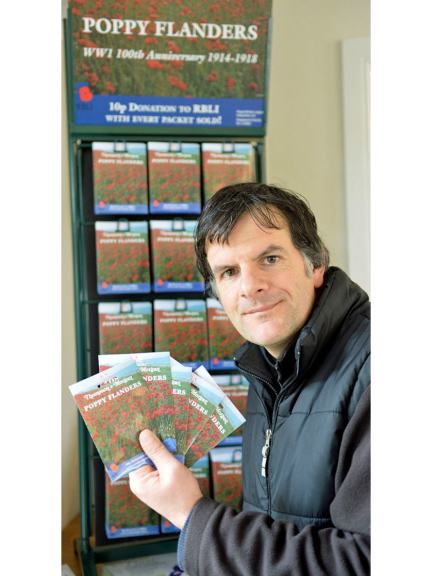 Leading Shropshire-based caravan dealership Salop Leisure has sown Flanders Poppy seed in its grounds to mark the centenary of the First World War this year.

The company, based alongside Shrewsbury bypass at Emstrey, is hoping the poppies will bloom in a wild flower area of its holiday home village in time for the centenary of the outbreak of war on July 28, 1914.

To mark the centenary, seed company Thompson and Morgan has pledged to donate 10p to the Royal British Legion for every packet of Flanders Poppy seeds that it sells. The seeds are being stocked by Love Plants, the specialist plant centre based at Salop Leisure.

Centre manager Tim Robinson is expecting strong demand for the seeds as customers across Shropshire and surrounding counties seek to mark the centenary of the Great War.

“I think it’s very important to raise public awareness of the human sacrifice made during the First World War and to not forget it,” he said. ”Planting the Flanders Poppy seeds is a very good way to mark the centenary.

“Poppies are excellent for the garden because they provider a splash of colour, attract bees and insects that will pollinate other plants and don’t take much looking after, as they are annuals that self-seed.”

The use of the red poppy as a symbol of remembrance derives from the fact that it was the first plant to re-emerge from the churned up soil of the battlefields during the First World War.

A poem by Lieutenant Colonel John McCrae, a Canadian medical officer, began the process by which the Flanders Poppy became an internationally recognised symbol of remembrance.

The inspiration for the poem was the burial of a fellow officer during the second battle of Ypres in May, 1915. McCrae’s verses, scribbled in pencil on a page torn from a despatch book, were sent anonymously by a fellow officer to Punch magazine in England, which published the poem under the title ‘In Fllanders Fields’ on December 8, 1915. Subsequently the poem was published around the world to wide acclaim.

Among those moved by the poem was Miss Moina Michael, who worked at the YMCA Overseas War Secretaries’ Headquarters in New York and came up with the idea for the Flanders Fields Memorial Poppy.

When three delegates attending the 25th conference of the YMCA Overseas War Secretaries on November 9, 1918 – two days before Armistice was declared - gave her 10 dollars as a mark of appreciation for brightening up for the venue with flowers, she purchased 25 artificial red poppies.

She pinned one to her own collar and distributed the remainder to the YMCA secretaries with an explanation of her motivation. She subsequently campaigned tirelessly to get the poppy adopted as a national symbol of remembrance, which resulted in the American Legion adopting the flower in 1920.

Love Plants
Why not check out this Garden Centres and Nurseries business in Shrewsbury. Love Plants is a 'thebestof' business member.
Latest Articles