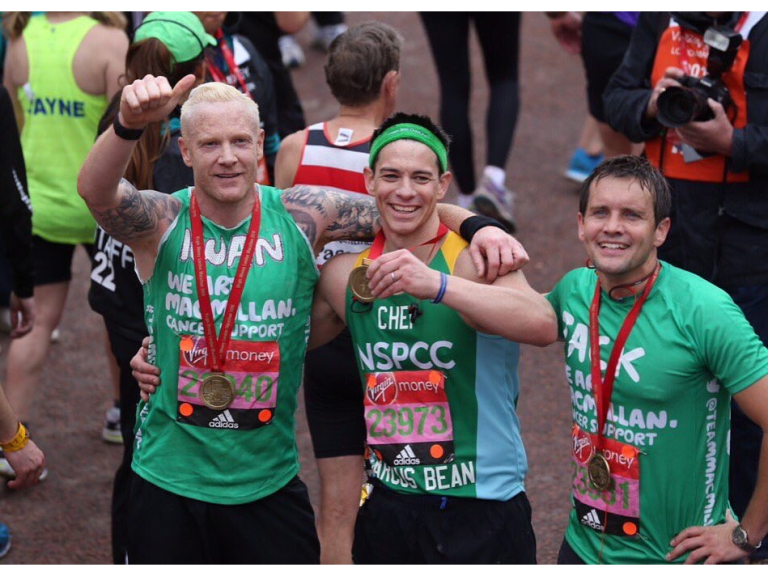 Shropshire celebrity chef Marcus Bean admits he was delighted to clock under four hours for the London Marathon - with his efforts all the more impressive given his lack of training ahead of one of the biggest challenges any runner can face.

His exploits in pounding the streets of the capital raised nearly £2,000 for the NSPCC, a charity which protects children, after Marcus teamed up with former Great Britain 400 metres Olympic star Iwan Thomas for the closing stages. The duo encouraged each other to achieve their aim of a sub four-hour run.

Marcus leads a busy lifestyle which meant he struggled to find time to prepare - but believes the hours he spent in the gym at The Shrewsbury Club, where he is a member, proved key in helping him complete the course in 3:58:42, just a minute outside last year's effort when he trained much harder.

"I was very happy to get pretty much the same time without doing as much training," said Marcus, a regular face on television screens, who also runs the Brompton Cookery School, near Shrewsbury, with his wife Jenny.

"Until the London Marathon, I hadn't really done any big runs at all this year - just the Shrewsbury 10K and another one the week before - so I was very happy to get in under four hours."

Marcus continued: "I try and go to the gym at The Shrewsbury Club a couple of mornings a week. I love going there and it's nice and convenient. I generally get there at 6am when it opens and train for an hour before getting home at 7.15am.

"There's great facilities there and it's perfect really for me. I've been doing it for the last couple of years on and off and it's just such a better way to start the day. I feel energised, motivated and I get more done, so I'm more productive.

"I always thought to myself I need to do a bit of cardio and then do a bit of weights. I do 5K on the treadmill which will sometimes take 23 minutes, sometimes a little bit longer, and then I go upstairs and do a mix of weights and some stretches.

"If I've got time, I'll go in the sauna and sweat it out a bit, or have a dip in the pool, but I generally keep it quite simple and it seems to work for me."

Marcus has already signed up for next year's London Marathon and is also considering having a go at mud runs and hill runs.

He added he was delighted to run for the NSPCC - he previously raised funds for Motor Neurone Disease - and that money is still coming in.

Donations in support of Marcus's London Marathon efforts can still be made to the NSPCC by visiting https://www.justgiving.com/Marcus-Bean5