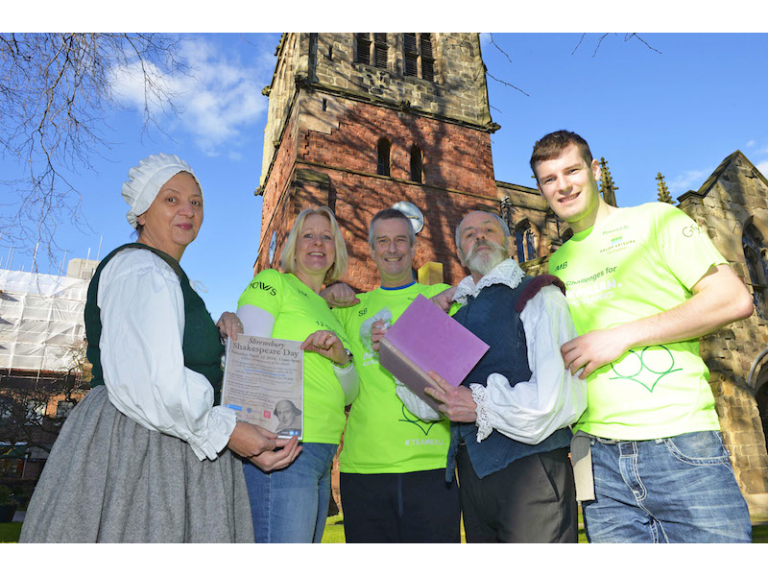 A full programme of events and activities is planned in Shrewsbury to mark the 400th anniversary of William Shakespeare’s death next month.

There will also be a Shakespeare treasure hunt, organised by Max Ball from Shrewsbury caravan dealership Salop Leisure as one of 12 challenges he has set himself this year. MaxAndTheMac12 aims to raise money for Macmillan Cancer Support, which is supporting his family as his father, Steve, battles terminal cancer.

Steve is a member of Shrewsbury Heritage and is really looking forward to the day.

There will also be Shakespeare insults in the Square while in Shrewsbury Castle grounds there will be a selection of school performances of Shakespearean scenes.

Shakespeare characters will appear around the town, including in shopping centres, a master class by a Royal Shakespeare Company educator will be held in the Wightman Theatre at 4pm and St Mary’s Church will be celebrating historic figures with links to Shropshire, England and St George.

Shropshire Youth Theatre joins in the celebrations by performing ‘Twelfth Night’ at Theatre Severn on both April 22 and April 23 and Maggie Love, artistic director of Shrewsbury Heritage, is co-producing Shakespeare's ‘Will at the Wightman’ the following week.

There will be collection buckets at each of the events to support MaxAndTheMac12 and Macmillan Cancer Support.

Maggie Love said lots of local people were volunteering to perform their favourite part, be one of Witches in Macbeth or a member of the dance team for Shrewsbury Shakespeare Day.

Anyone wishing to get involved is asked to contact Maggie on Tel: 07813 026367, email sytmaggie@yahoo.com or visit www.shrewsburyheritage.co.uk

Max’s challenges began last month with a bungee jump and continue with Dash of the Titan mud run in Nottinghamshire on March 26.

“In such a difficult time for my family, I felt I needed a challenge to keep me focused and busy throughout this year,” said Max. “The ideas for MaxAndTheMac12 came to fruition whilst all our friends and relatives offered kind messages of support to my dad and family.

“We are all working to raise money for Macmillan Cancer Support, a charity that provides detailed information and support for all the different types of cancer which are out there. Cancer should not be faced alone.

“The money raised by MaxAndTheMac12 will help Macmillan to reach more people with cancer and improve the quality of care and support available to them during their cancer journey.”