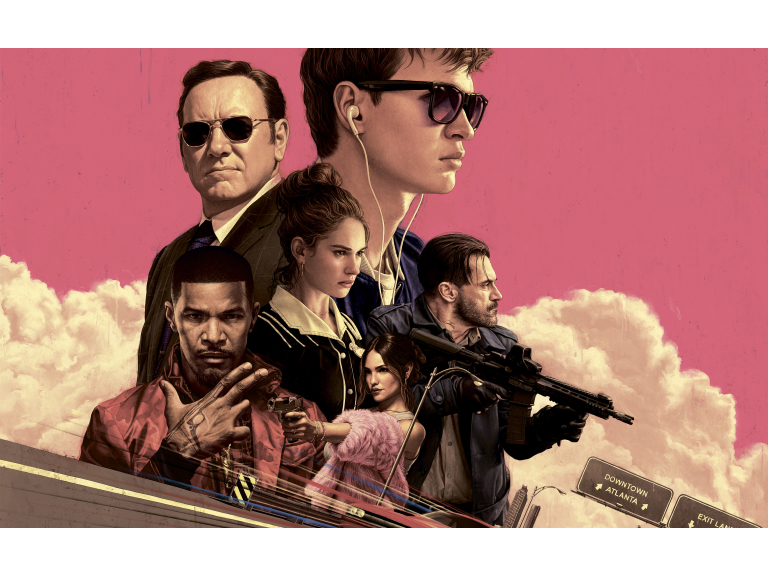 It’s rare that a film invents a new genre. It happened with Shaun of the Dead back in 2004 (the first ever Rom-Zom-Com). Now director Edgar Wright has done it again.

Baby Driver has been dubbed a ‘car chase musical’, which is exactly as awesome as it sounds. We went along to see it at the Cineworld in Shrewsbury and it’s hard to think of another film released this year that’s more original or more fun.

Nobody puts Baby in the corner

Meet Baby, played with dorky coolness by Ansel Elgort (Divergent, The Fault In Our Stars). Baby is a getaway car driver working to pay off his debt to crime boss Doc (Kevin Spacey).

What makes this action hero different? Apart from being a natural talent behind the wheel, Baby has tinnitus and listens to music all the time to drown out the ringing in his ears. With banks to rob and money to make, Jamie Foxx, Jon Hamm and Eiza Gonzalez tag along for the ride – and what a ride it is.

As ideas for films go it’s a strong one: killer action sequences set to hits from yesteryear. If you like Queen, James Brown, Martha Reeves & The Vandellas or The Beastie Boys, you’ll love this soundtrack.

It’s not a stretch to say the film is set to the music, rather than the other way around. In an early scene, as Baby dances down the street, lyrics to the Harlem Shuffle by Bob & Earl appear in the form of graffiti and street signs. There’s even a shootout where the gunshots match up to the drumbeat.

The result is two hours of slick, stylish, and immensely satisfying cinema. We found ourselves tapping our feet and bobbing our heads more than once.

Despite the heart-pumping car chases, at the heart of the film is a love story between Baby and Deborah (Lily James, Cinderella), a waitress at a local diner. Together they bond over music and a shared dream – to drive far away from their problems and start a new life.

There’s something timeless about the story of young lovers against the cruel world. Although Baby Driver is unlike anything we’ve seen before, it also feels like an instant classic.

It should be obvious by now, but we loved Baby Driver. A car chase musical may sound niche, but what it really means is that whether you like musicals, high-octane action, heist movies, or rom-coms, this is the film for you.

A ballet of fast cars, violence and romance that’s an exhilarating ride from start to finish, don’t miss Baby Driver out now at Cineworld Shrewsbury.

Stately home stars on the big screen as set for new movie Benediction
Sign up for offers
Sign up for what's on guide
Become an author
Popular Categories
By clicking 'ACCEPT', you agree to the storing of cookies on your device to enhance site navigation, analyse site usage, and assist in our marketing efforts.
For more information on how we use cookies, please see our Cookie Policy.