A number of British players will be aiming to book places in tonight’s main draw for the $15,000 Aegon GB Pro-Series tournament when the final round of qualifying takes place at The Shrewsbury Club today.

This week’s British challenge in Shrewsbury will be spearheaded by Marcus Willis, who reached the second round at Wimbledon last summer, while a host of other Brits will be looking to impress at an International Tennis Federation event.

A busy opening day of the tournament saw two qualifying rounds completed yesterday - with Nick Weal, a coach for the Great Britain Davis Cup team, among the spectators just a few days after returning from the team’s victory in Canada.

He headed to Shrewsbury in his role as men’s coach for the Lawn Tennis Association as he took the chance to watch a host of up and coming British players in competitive action.

The final round of qualifying - eight matches in all - will get under way at The Shrewsbury Club at 10.30am this morning.

Julie Piper, the tournament director for the Lawn Tennis Association, said: "We had a full sign in for the qualifying. There were 32 matches played yesterday so it was a long day and it featured a lot of British hopefuls and many players from overseas. 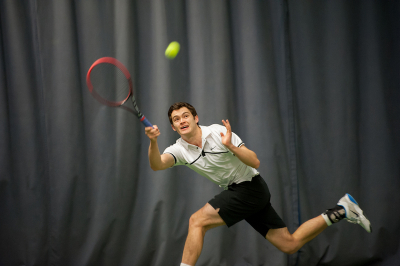 British player Mark Whitehouse in action during the first round of qualifying at The Shrewsbury Club. Picture by Richard Dawson

“This is the third of three similar tournaments in quick succession held in the UK following Glasgow and Tipton, so many of the players will have been there and then travelled on to here, before heading overseas from the end of this week.”

The eight players to win through today’s matches will take their place in the first round of the main draw to be held at a civic reception hosted by the Mayor of Shrewsbury, Councillor Ioan Jones, at The Shrewsbury Club tonight (6.30pm).

Julie added she was delighted with the quality of this week’s entry list.

“We’ve got lots of good British players taking part,” she said. “Marcus Willis did so well at Wimbledon last year while Derbyshire’s Jay Clarke has done well in his last two tournaments.

"Lloyd Glasspool and Scott Clayton are also in the main draw and there will be the four wild cards plus any qualifiers, so we should have a good mix of British players in there.”

Admission to enjoy the action at The Shrewsbury Club is free throughout the week.