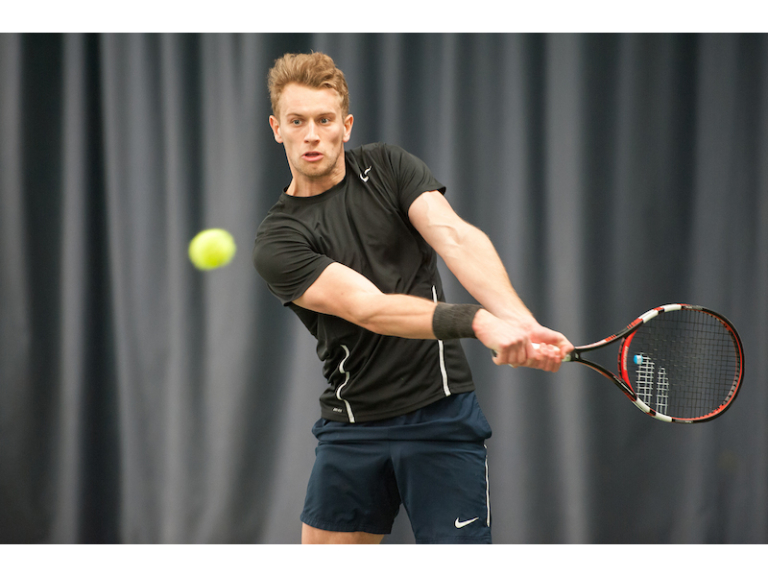 The upsets keep coming in the $15,000 Aegon GB Pro-Series tournament at The Shrewsbury Club with British player Tom Farquharson hitting the heights to reach the quarter finals at the expense of No 2 seed Antal Van Der Duim.

Farquharson, from Surrey, made light of the near 400 place gap between himself and Dutchman Van Der Duim in the world rankings to set up a last eight clash against German Jan Choinski at the Sundorne Road venue today.

There is guaranteed British interest in the semi-finals with two players currently in the top 10 of the national rankings, Dan Cox and Josh Milton, facing each other in the last eight today.

Milton accounted for lower ranked Brit Scott Clayton 6-3, 6-3 while Cox, the world number 263, overcame German Mats Moraing 6-4, 6-4 in round two to set up a clash against a man he knows well.

"It's always tough playing against a friend," said Cox. "We used to live together when we were down in London training so it's always very difficult.

"I think I might just have a slight upper hand on head to head, but either way we don't really look at that. We just try and fight for every point and I'm sure it will be a good fight."

Cox reached the quarter finals in this tournament last year, but he's keen to go further this time.

"Last year I made the quarters and it didn't really go as planned," he added. "But I really like the venue, it's a nice club, so I feel comfortable here."

Cox, at three, is now the highest seed left in the tournament following the early exits of Van Der Duim and also, a day earlier, No 1 seed Jan Mertl.

Austrian Maximilian Neuchrist, who claimed the notable scalp of Mertl in round one, followed it up with another useful win to see off Brit Joe Salisbury 7-6, 6-2.

The remaining quarter final will be between British player David Rice, a 6-3, 7-6 second round conqueror of fellow Brit Marcus Willis, the No 6 seed, and Quentin Halys.

Frenchman Halys delivered an impressive display to see off Adrien Bossel, the No 4 seed, who played for Switzerland in their Davis Cup defeat in Belgium last month, in straight sets 6-3, 7-6.

Today's play begins at The Shrewsbury Club at 11.30am and admission is free.