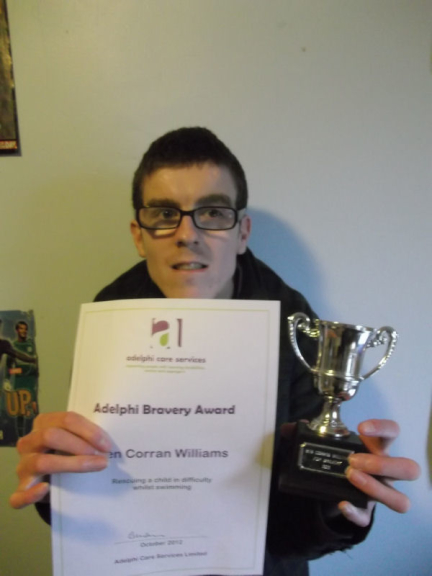 A 21-year-old Shrewsbury man with learning difficulties has won a bravery award after he saved a toddler from drowning whilst on holiday.

Ben Williams who lives at Bomere Heath was on holiday in North Wales when he saved the little girl from being taken under water by the rapids at the resort swimming pool.

Ben jumped into action after seeing the toddler being taken by the strong current of the rapids as her mum looked on helplessly as she was holding her other young child.

The girl was in a rubber ring but the water took hold and swept her into the rapids. Ben was at the side of the pool holding on to the railings when the drama unfolded and grabbed hold of the little girl and pulled her to safety.

Ben, who lives at Merrington House which is run by Shrewsbury-based Adelphi Care Services and provides residential care for adults with Austism, Aspergers and learning difficulties, was thanked by the young girl’s mother and by the lifeguards who saw Ben pull the girl to safety.

He has since been awarded a bravery award by staff at Hafon-y-Mor in Pwllheli and was awarded a further trophy by staff from Adelphi Care Services, based at Longbow Professional Centre, at their annual Celebration of Success awards dinner which celebrates the adult’s achievements in their care.

The award was presented to Ben by the mayor of Shrewsbury councillor Keith Roberts.

Alan Roberts from Adelphi Care Services who supports Ben, said: “I have no doubt in my mind that what Ben did that day at the swimming pool saved the little girl from danger or even more serious consequences.

“Ben, who suffers with learning difficulties, did not think twice about helping the little girl despite the strong strength of the current and the whirlpool. “Since this event we have seen Ben’s confidence bloom and he enjoys telling people his story about how he saved the little girl’s life.

“Being recognised for this has further boosted his morale and the award and trophy from Adelphi Care Services was thoroughly deserved.”

The incident happened in August this year but Ben was presented with his certificate and trophy for his bravery at the company’s recent Celebration of Success event. Adelphi Care Services provides care and accommodation in Wem, Shrewsbury and Bomere Heath and has recently opened the first respite centre for adults with Autism in Shropshire at a cost of £500,000.