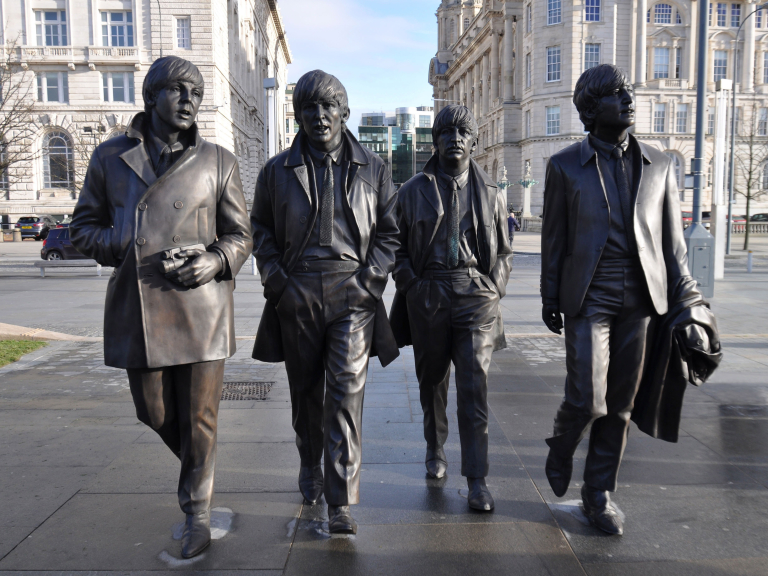 The Beatles are returning to Shropshire more than half a century after their last appearance in the county.

Only this time the Fab Four will be an eye-popping seven feet six inches high and made of resin.

Replicas of the famous statues unveiled on Liverpool’s waterfront in 2015 will be stopping people in their tracks in the foyer of Shrewsbury’s Theatre Severn, and are being brought to the county town as part of Shrewsbury Beatles Weekend.

The mini-festival on September 20, 21 and 22 is a series of fundraising events in aid of the Samaritans of Shrewsbury, the chosen charity of this year’s Mayor of Shrewsbury, Councillor Phil Gillam.

“These extraordinary statues of John, Paul, George and Ringo will delight their fans and theatre-goers over the next few weeks in the run-up to Shrewsbury Beatles Weekend,” said Councillor Gillam. “We are so grateful to Chris Jones and his colleagues from Castle Fine Arts Foundry near Oswestry for agreeing to bring these stunning works of art to Shrewsbury for us.

“It just so happens that Chris lives in Shrewsbury, heard about our Fab Four weekend and offered to help.”

These identical copies of the Liverpool originals will be on show during normal opening hours at Theatre Severn from Tuesday 3rd September right the way through to September 22, the last day of the Beatles Weekend.

They are seven feet six inches high and each one weighs 50kgs. They are being loaned free of charge by Castle Fine Arts Foundry.

Shrewsbury Beatles Weekend is offering cinema screenings of five Beatles-related films at the Walker Theatre, an illustrated talk at The Hive in Shrewsbury, special town tours, and live music at the town’s Buttermarket and the Wheatsheaf in Frankwell.

The flesh-and-blood Beatles staged their final Shropshire concert at The Music Hall in Shrewsbury back in 1963.

Meanwhile, The Mersey Beatles concert at Theatre Severn on the Sunday night of Shrewsbury Beatles Weekend sold out within just a few weeks of being announced.

Full details and a 24-page souvenir brochure (PDF) of the Beatles Weekend can be found at www.shrewsburybeatles.com