Baroness Tanni Grey-Thompson, one of Britain's greatest Paralympians, is heading to Shrewsbury next month to headline a sports dinner.

Baroness Grey-Thompson will share stories of her highly successful career with guests at The Shrewsbury Club on Friday, November 11 at a dinner to be held on the eve of the final of the Aegon GB Pro-Series women's tennis tournament the following afternoon. 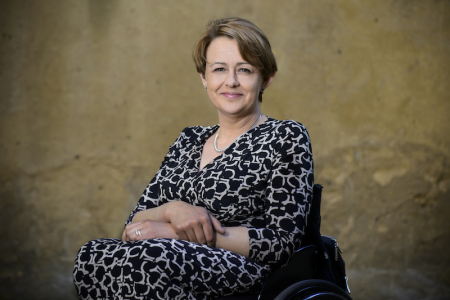 Only a limited number of tickets remain for the event, with organisers delighted to have attracted another high-profile speaker following the successful visits of the likes of John Inverdale and Judy Murray in recent years.

Dave Courteen, the managing director of The Shrewsbury Club, said: "We are delighted that Baroness Grey-Thompson will be joining us and it's almost a sell out already with only a handful of tickets still available.

"We look forward to hosting her and I know she is also looking forward to it. We are building a reputation for our enjoyable sports dinners and it's pleasing that we have been able to attract another great speaker. "

He added: "Inclusivity is the theme for next month's Aegon tournament week and we are proud of the wheelchair tennis group based at The Shrewsbury Club.

"Baroness Grey-Thompson, part of the Tennis Foundation which works with wheelchair tennis, is an iconic figure in sport in general and, through her brilliant Paralympic record and the inclusivity element, she is the ideal person to be our special guest."

The winner of 11 gold medals, four silvers and a bronze on the track competing at five Paralympic Games between 1988 in Seoul and 2004 in Athens, she also claimed victory six times in the London Wheelchair Marathon.

She became an independent crossbench peer in the House of Lords in 2010, taking the title Baroness Grey-Thompson of Eaglescliffe in the county of Durham.

The remaining tickets for the sports dinner are available priced £35 for a three-course meal and coffee, or £350 for a table of 10 which includes two complimentary bottles of wine on the table. For more details, call (01743) 467755.