Baroness Tanni Grey-Thompson, one of Britain's greatest Paralympians, entertained guests at a Shrewsbury sports dinner with stories from her inspirational career.

Baroness Grey-Thompson was special guest at The Shrewsbury Club for a dinner held on the eve of the final of the latest Aegon GB Pro-Series women's tennis tournament staged at the Sundorne Road venue.

She headed to Shrewsbury direct from an engagement earlier in the day in Paris and proved a big hit with the capacity crowd, which included Cathie Sabin, the Shropshire-based president of the Lawn Tennis Association.

Geraint Richards, the head of disability player performance at the Tennis Foundation, also delivered an insightful speech about the recent record-breaking success enjoyed by the Team GB wheelchair tennis team at the Rio Paralympics.

Dave Courteen, the managing director of The Shrewsbury Club, said: "It was a really enjoyable evening and we were delighted to have the company of two really entertaining speakers who captivated the audience.

"Geraint offered an interesting insight into how the success enjoyed by the British wheelchair tennis team in Rio was achieved, the attention to detail which proved so important." 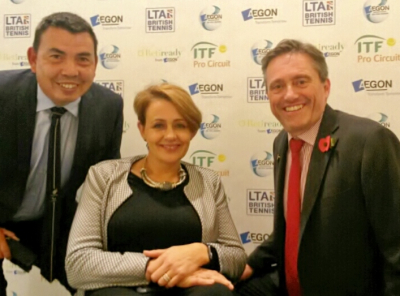 Dave continued: "Tanni's story is just extraordinary and it was a real pleasure to have her with us. We have been fortunate to attract some brilliant speakers to The Shrewsbury Club - but Tanni was something else and listening to her was an absolute privilege."

The winner of 11 gold medals, four silvers and a bronze on the track competing at five Paralympic Games between 1988 in Seoul and 2004 in Athens, Baroness Grey-Thompson also claimed victory six times in the London Wheelchair Marathon.

She became an independent crossbench peer in the House of Lords in 2010, taking the title Baroness Grey-Thompson of Eaglescliffe in the county of Durham.