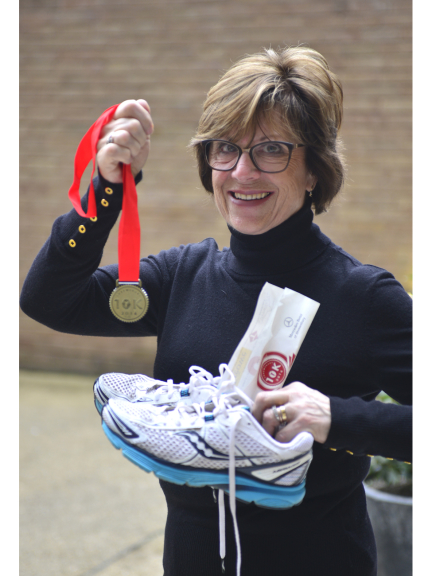 A legal assistant from Shrewsbury law firm Wace Morgan Solicitors is aiming for European qualifications as an amateur athlete.

Barb Somers, who works in the commercial conveyancing department at Wace Morgan’s Shrewsbury head office recently ran in Shrewsbury’s first 10k road race along with hundreds of other keen runners.

Barb is 63 and lives in Cressage. A top national triathlete in her age group, she finished the winding course around town in her target time. She was sponsored by her employers Wace Morgan Solicitors for £100, which was donated to the charity Crohns and Colitis UK.

She said: “The event was very well organised, I thoroughly enjoyed it despite finding Port Hill hard running!

“The crowds were amazing, cheering everyone on and my goal was to come in under the hour and I just made it by clocking up 59.11! I was also fourth in the over 60s category.”

Barb regularly competes in triathlons, with her next one being the Nottingham Sprint on May 28 which is a pre-event for the European championships 2017 which she is hoping to qualify for. She has a successful record in national and international events and has previously taken part in the GB Age Group Team, finishing 15th in the world championships.

“I am now also a British Triathlon Federation official/referee which takes me all over the county officiating in events,” added Barb.

We wish the best to Barb in all her future events!