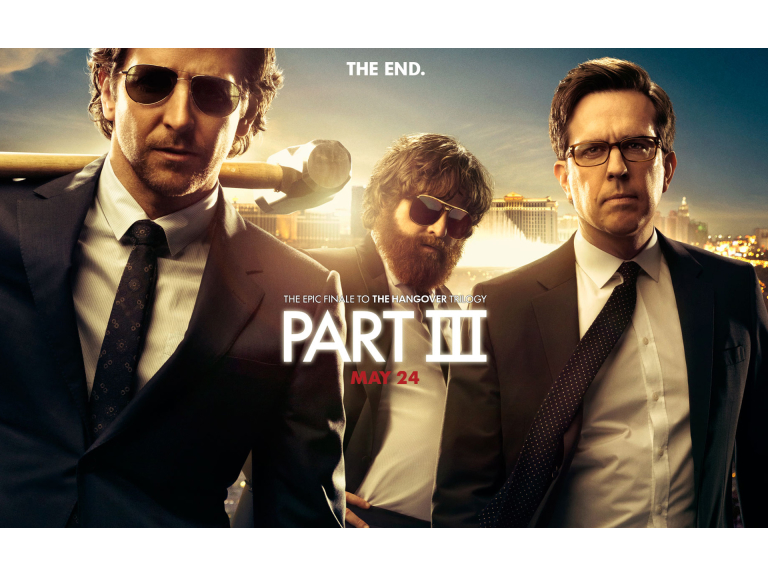 If you aren't already nursing a hangover of your own this 2013 May Bank Holiday in Shrewsbury, you can watch these infamous rogues creating their own mayhem at Cineworld Cinema in Shrewsbury.

This is final instalment of the blokey comedy franchise - though as a lady, that doesn't mean us female folk can't enjoy it (and if my recent hen do was anything to go by we can give the men a run for their money in the fun stakes.) But hopefully not quite as wild as a night out with these guys - that would take some doing!

For the final in this trilogy (which was only every supposed to be one film) it really could have gone either way.

The first was an unexpected delight, with its clever "what just happened?" structure, the second was an unimaginative replica - the third..offers something a little different in the roller coaster of shock tactics.

There is less of a hangover this time, less piecing together of what has gone on. This time our trio are rather more compos mentis, but still on the back foot most of the way through their caper.

The film starts with a motorway gag as Alan (played by Zach Galifianakis - who is fast becoming a hero of mine, what a character) has been "off his meds", so his "wolfpack" buddies stage an intervention, and off they go on another ill-fated road trip.

En-route, they're kidnapped by John Goodman, who wants them to find Mr Chow (Ken Jeong), the Chinese gangster of the previous movies.

There are heists, abductions, car chases and other escapades that, inevitably, end back in Las Vegas. The gags aren't any less funny, they are just set up differently, and remember - how many years can some near middle-aged chaps keep up the drinking and drug taking? Surely their lives have to have moved on as have all of ours?

Alpha wolf Phil (Bradley Cooper - swoon, though they did put him some awful trousers) and nerdy dentist Stu (Ed Helms - who has been released of his facial tattoo - though wait for the closing credits to see what they do him this time) both swear and scratch their heads a great deal. Mr Chow (a former Doctor in real life) is pretty much off his rocker and his part (no pun intended!) is elongated - more for the better.

But it's Galifianakis's Alan – a camp sociopath whom you're never sure whether to laugh at or report to the authorities who by far steals the show.

He's an original, unsettling comic creation, and this is really his story – how he overcomes his barely sublimated desire for Cooper. This is thanks to an under- used Melissa McCarthy who you will recognise from Bridesmaids - quite literally the female Alan and an utter, utter, delight in every way. Through his excpetional meeting with her (it did bring a tear to my eye), Alan manages to establish some stability.

If the Hangover franchise has been about anything - it's male buddyship. With each movie, these men go through intimate bonding trials they'd rather not tell their female partners about, invariably involving drugs, nudity and a walk on the wild side.

Other reviews I have read have, quite frankly, put me off seeing this movie. Don't let them do the same to you. Reviews, as is this one, are personal opinions after all. If you have been told to expect 'few surprises and fewer laughs' - ignore it. Go to this movie expecting a slighlty different formula yes, but wouldn't it have been getting a little old to see three versions of the same night out. Probably. I was rather sad to wave goodbye to these three. And felt a little lighter knowing they'll be alright.

The Hangover III is playing at Shrewsbury Cineworld for the next few weeks. Visit the website or call 0871 200 2000 to book or check cinema times.