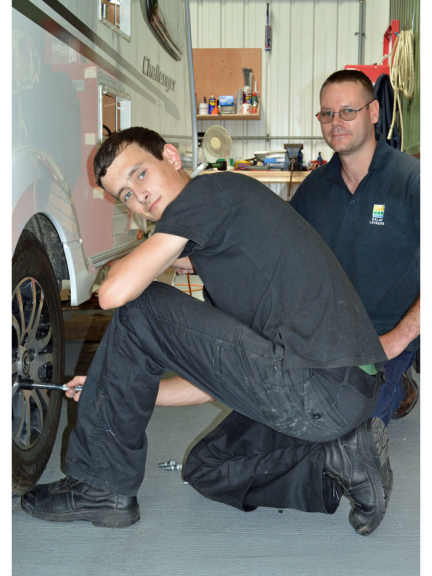 The latest apprentice to be recruited by award-winning Shrewsbury caravan dealership Salop Leisure is 17-year-old Connor Sale from Pontesbury.

Connor, who completed levels one and two engineering qualifications at Shrewsbury College, has begun an apprenticeship in workshop procedures at the Emstrey-based company.

He has been taken under the wing of qualified engineer Neil Adkins at Salop Leisure, which believes in pairing up apprentices with experienced staff who share their skills and knowledge.

“I’m enjoying the job and learning a lot from Neil,” said Connor. “My aim is to progress my skills and become a qualified engineer at Salop Leisure.”

Salop Leisure’s chairman Tony Bywater, who champions apprenticeships, said: “It has always been the company’s policy to bring young people into the business when they leave school and to offer them apprenticeship opportunities.

“Many of the young people we have employed over the years have progressed into very responsible positions to take our business forward. In addition, they have developed into good citizens and we are very proud of them.”

The number of workshop engineers employed by Salop Leisure has grown from five to 15 in three years due to a major increase in business.