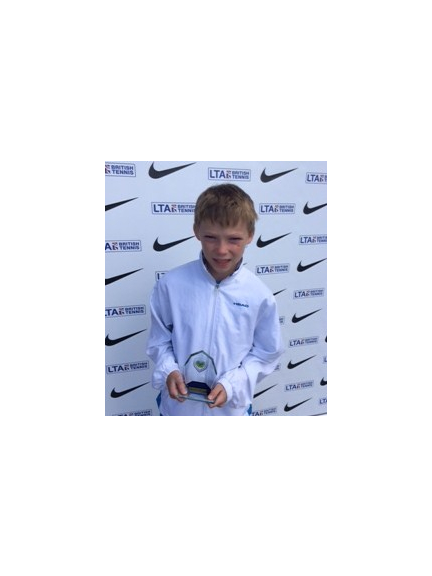 Highly rated young tennis ace Roan Jones, a junior member at The Shrewsbury Club, has ended his excellent season ranked number one on the national 10U competition leaderboard.

Roan, from Condover, enjoyed another highly successful season as he continues to move firmly in the right direction.

The highlight of the 2014 season for the talented 10-year-old were outstanding victories in the Scottish Junior Open Championships in Glasgow and the National Clay Court Championships in Hertfordshire.

The Condover Primary School pupil nearly added another national title to his collection last week having battled his way through a tough draw to reach the final of the 10U National Finals held on the clay at the West Hants Tennis Club in Bournemouth.

But he was narrowly edged out by Harry Lazell, from Warwickshire, in three sets in the final. Roan won the first set 4-0 but lost the second 4-2 before finally going down 10-4 in the tie break.

Nigel Hunter, director of tennis at The Shrewsbury Club, said he was delighted for Roan to have achieved the number one ranking for a player in his age group in the country.

He added: "Roan's won national championships before but to end the season as number one player overall in his age group is excellent.

"It was a real challenge for Roan to be the top player his age when he was younger and the fact he's keeping to such a very high level is a brilliant effort.

"He's such a nice lad and his family are extremely supportive with the dedication they all show to Roan's tennis.

"They put in a lot of miles travelling to events up and down the country and it's fantastic that Roan is getting his just rewards."

Roan trains at The Shrewsbury Club up to six times a week with his Slovakian coach Jaro Novak while the other coaches at the Sundorne Road venue also help with his exciting development.