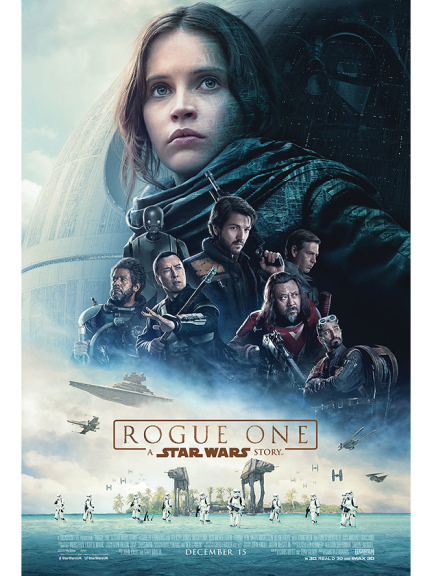 It’s not really a secret that we’re big Star Wars fans, so we had high expectations for Rogue One: A Star Wars Story when we saw it at Cineworld in Shrewsbury. Imagine our delight to find not only is Rogue One a great film, but it might even be better than The Force Awakens…

This is the first in the series of stand-alone Star Wars films Disney has lined up for release, and tells the story of the mission to obtain the Death Star plans. Those plans, of course, help Luke Skywalker and his friends to blow it up in A New Hope. At the start of Rogue One The Rebel Alliance are tipped off that the Empire is building a new superweapon with the power to destroy planets and needs to be stopped at all costs – enter Jyn Erso (Felicity Jones), the stoic, grim-faced daughter of the engineer tasked with designing the Death Star. Along with the morally-dodgy Cassian Andor, a defected Imperial pilot, a blind monk and his gun-toting companion, she sets off on a quest to save the galaxy from seriously dark forces.

After a flashback to a young Jyn and the moment her family broke apart, the opening takes some time to get settled. Suicide Squad had a similar problem – because there are a few main characters we have to meet them all, and as a consequence it feels a little jumpy. Luckily, once introductions are out of the way the film soon finds its flow, and by the final hour it’s a straight sprint to the finish line.

Another potential sticking-point for some could be the use of CGI in the film. Although the recent Star Wars productions have been applauded for their return to traditional effects, this film features Peter Cushing’s icy villain Grand Moff Tarkin, reincarnated through high-tech animation, which probably cost at least a million of its 200-million-dollar budget alone. We were torn – some of us weren’t too bothered by it, and some thought it was a terrible idea, not to mention spookily unethical. There’s a CGI cameo from another famous character right at the end, too, but we won’t spoil that one for you.

Again, many have been divided by the touches of nostalgia in the film. For our part, they blended in well – what can you expect from a film that takes place directly before A New Hope? Keep an eye out for a couple of troublemakers from a Tatooine bar…

Although it feels like you’re right back in the Star Wars universe, this film does have its differences. Despite comic relief from the sarcastic Imperial robot K2, Rogue One is a darker entity, and seems to have taken its cues from espionage and war films. For that reason, younger audiences might prefer Star Wars: The Force Awakens. Still, Rogue One hasn’t forgotten its roots as a gun-slinging, heart-racing action movie, and the final act on Scarif is pure cinematic gold.

We’ve got another year to wait until Star Wars eight comes out, but Rogue One will definitely tide you over – at least for a little while. There are plenty of screenings throughout the Christmas holidays at Cineworld Shrewsbury and we have a feeling it will be sticking around for a while. Excuse us while we go and see it again.