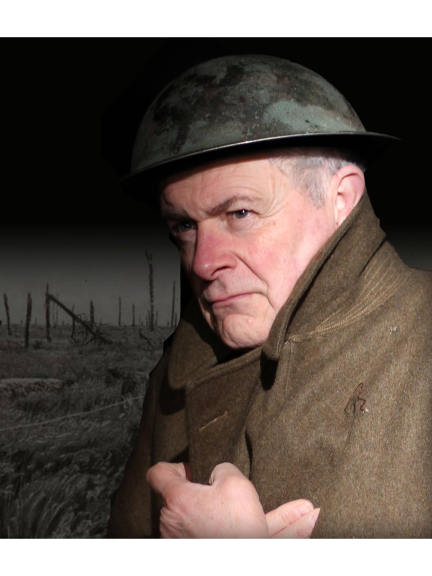 We're fortunate in Hitchin, with three theatres and numerous other drama and dance companies and organisations. I'm not allowed favourites and that's fine, because they all contribute to the creative life of the town.

I recently caught two separate plays at the Market Theatre on Sun Street. They could not have been more different, but both were moving, with expert writing and acting.

I saw Reunion at the start of July - an ensemble piece directed by Keith Swainston for the new 'Walking Shadow' group of writers and performers. Hilarious in part with a deeply tragic twist, it was an enjoyable evening.

The most recent play I saw was a one-man portrayal by the same Keith Swainston. 'FE Young VC' was written and directed by Kirk Foster and it told the story the man whose name appears last on the Hitchin War Memorial outside St Mary's Church.

Frank Young was born in India, educated in Bedford but then began work when his family mvoed to Hitchin a few years before the outbreak of war. While the story of Young's military career was moving and interesting, I found most poignant the portrayal of a town in the months running up to 4 August 1914.

My own home was built around 1911, as were many of those on the edge of the town centre. It was a time of great change for the town and the many names listed on the war memorial would indicate that most families lost sons, brothers and fathers. Most of these houses would have known the sadness of lives lost far away in the horrors of a war that seemed un-ending.

Keith's portrayal of Frank was one Hitchin man speaking the imagined words of another, penned by a third.

I cannot recommend this play highly enough, especially in the next few months, when the centenary of World War 1 events will often seem huge. 'FE Young VC' made it personal and while we remember them as people, we are more likely to ensure that tragic loss of a generation is less likely to happen again.

There are no plans for the play to be repeated. Yet. But it should be. It should be performed in schools and maybe even by schools. To those of us who know young men approaching adulthood, they are the Frank Youngs of today.

Find out more about the Market Theatre here: http://www.markettheatre.co.uk/