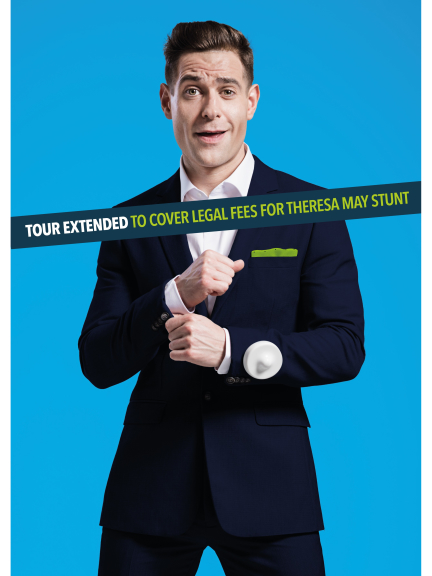 “This is satire so sharp you could slash a tyre with it” ★★★★ Rupert Hawksley, The Daily Telegraph

“Never lost for words, never less than ingenious” Dominic Maxwell, The Times
“The guy has a gift” Matt Bonesteel, The Washington Post
“You should be ashamed of yourself” Sepp Blatter (disgraced former FIFA President)

After handing Prime Minister Theresa May her P45 during the Conservative Party Conference before being frogmarched out and swiftly arrested, this spring will see Simon Brodkin embark on the third leg of his hit stand-up tour ‘Serious Joker’ as the impish Lee Nelson with 45 dates added across the country, including two shows at London’s Leicester Square Theatre on 30th May and 14th June, bringing the tour to 169 dates. Lee will be coming to a town near you from Wednesday 2nd May with tickets on general sale from 26th January at leenelson.com.

The renowned prankster’s antics have previously led him to make the acquaintance of some of the world’s most newsworthy and least likable human beings including surrounding President Donald Trump with Swastika emblazoned golf balls as part of the new Trump Golfing range, receiving 4 ‘yeses’ from Simon Cowell as an incognito rapping Rabbi, and re-christening Sir Philip Green’s hundred-million pound yacht as “BHS Destroyer”. Channel 4 secured exclusive and unrestricted access to Simon in 2016 as he lifted the lid on the months of meticulous planning and preparation that go into pulling off a successful stunt. Britain’s Greatest Hoaxer aired on the channel in February 2017.

Under the guise of Premier League footballer Jason Bent, Simon created one of the most iconic images of 2015 as he showered disgraced FIFA President Sepp Blatter in bank notes at the organisation’s headquarters in Zurich, live on TV in front of world’s press. Additionally Simon has rapped alongside Kanye West onstage during the idol‘s headline set at Glastonbury, gate-crashed a prime-time Saturday night broadcast of The X Factor (ITV), and joined the England football team ahead of their flight to the 2014 World Cup in Brazil.

On TV Simon has enjoyed numerous hit shows as his most famed character, Lee Nelson, having written and starred in Lee Nelson’s Well Good Show and Lee Nelson’s Well Funny People on BBC Three.  As Lee he has hosted and twice appeared as a guest onLive at the Apollo (BBC One), and has performed on shows including Sunday Night at the Palladium (ITV) and The John Bishop Christmas Show (BBC One), as well as releasing a live stand-up DVD. In 2015 – 2016 Simon toured the country as Lee with his showSuited & Booted, his fourth sell-out nationwide stand-up tour.  Simon’s additional TV credits include Channel 4’s Comedy Gala, Absolutely Fabulous (BBC One), and Children In Need (BBC One).  He has taken six solo shows to the Edinburgh Festival Fringe, where he won the Writer’s Guild Award for Best Newcomer.

Issued for and on behalf of avalon-entertainment.com

Free or Affordable Search Engine Optimisation for Small Businesses
Sign up for offers
Sign up for what's on guide
Popular Categories
By clicking 'ACCEPT', you agree to the storing of cookies on your device to enhance site navigation, analyse site usage, and assist in our marketing efforts.
For more information on how we use cookies, please see our Cookie Policy.