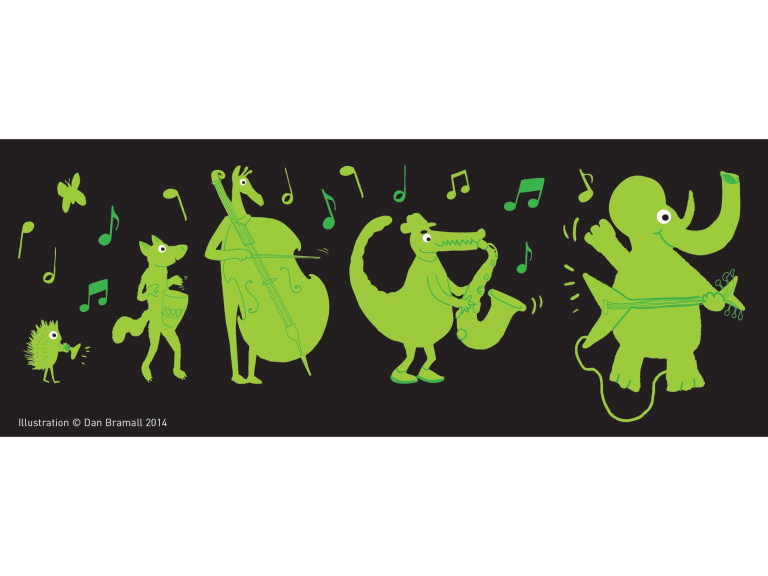 When the Rhythms of the World music festival wanted to update their visual identity, they could have looked anywhere around the world. Instead, they chose Hitchin’s Dan Bramall (aka The Scribbler), who created an iconic band of illustrative creatures.

“I started brainstorming animals and musical instruments from different continents, and then sketched out characters that made me smile,” said Dan. “What we ended up with reflected the variety of music heard at the festival, both world and local, and evoked the values behind Rhythms of the World, which is all about celebrating music and having fun.”

Dan is an experienced freelance illustrator and graphic designer, producing work for everything from book covers to gas bills and even having his artwork printed on a milk carton.

His work is graphic, colourful and fun and inspiration comes from the imagery used in popular culture, signage, animals, picture books and the quirky things in life.

Not only did Dan create the sax playing croc and her friends, but he also worked with Mark Sharp from Inky Design Graphics on the rebrand of the festival’s visual identity and all its marketing material.

At the start of the year, Rhythms of the World beermats, stencils, T-shirts and posters, all featuring Dan’s artwork, were designed to announce the arrival of the 2014 festival, held at Hitchin Priory on 2 and 3 August.

“It’s such a great festival,” said Dan. “Rhythms brings the whole community together and it’s great to be a part of that. To see your designs all over the town – and further afield – is amazing.”

Other clients of The Scribbler include international and local companies and Dan has been selected for, and exhibited as part of, the Association of Illustrators’ "Images – The Best of British Illustration" and The Transport for London poster competition. Recently, he has turned his hand to painting again and been exhibiting in the local area.

Dan lives in Hitchin, Hertfordshire with his family and Layla, the cat with five extra toes. More of his work can be seen on www.thescribbler.co.uk