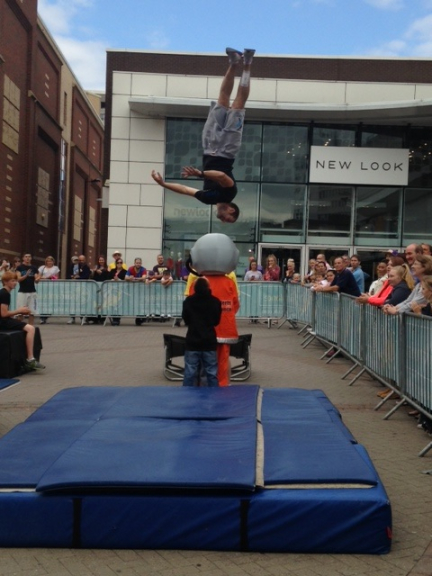 Shoppers in Hitchin Market will be treated to a free and thrilling display of acrobatics on Saturday 29th October when Team Kinetix – experts in Parkour, free running and acrobatics, showcase their skills in aid of Herts Air Ambulance.

The stunt performances will take place between 9 am and 4pm at Hitchin market, where crowds will be treated to spectacular jumps over brand new cars, kindly supplied by event sponsor Palmers Motors of HemelHempstead.

Laura Blackwell, Community Coordinator at Herts Air Ambulance, said: “If you are out and about in Hitchin on Saturday 29th October don’t miss Team Kinetix and their spectacular stunt displays! It is set to be an entertaining event for everyone and a great chance to support and help raise vital funds for your local Air Ambulance Charity.”

The Air Ambulance team, along with their merchandise stand and mascot Pilot Pete, will also be on hand to explain more about the Charity and how Herts residents can help support it.