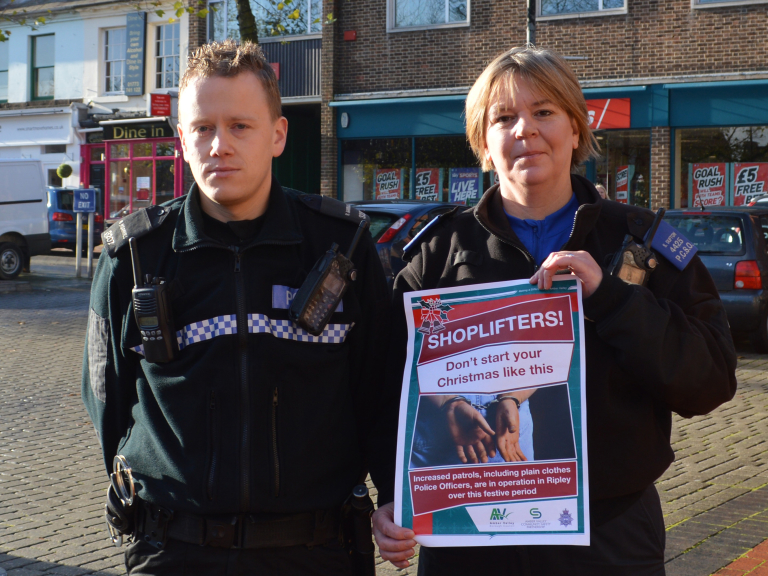 Police in Ripley are stepping out in a seasonal campaign to shelve retail related crime in the town centre.

Extra patrols are being carried out around shops and supermarkets to help target shoplifting and prevent purse thefts on the run up to Christmas.

As part of the campaign, officers from the Ripley Safer Neighbourhood Policing Team are working alongside local businesses and the town’s Shop Watch scheme.

Posters are being delivered to stores to remind people of the consequences of shoplifting and events are being set up to offer free purse chains and bells to festive shoppers.

Shop Watch in Ripley was set up by police and the Amber Valley Community Safety Partnership to help target and prevent retail related crime.

The radio system to helps stores and the police keep up-to-date on any suspicious activity in the town, and allows police to respond more quickly to incidents.

Through the Shop Watch initiative, stores also work together to ban any persistent offenders.

PC Rich Martin of the Ripley Safer Neighbourhood Policing Team said: “There tends to be a slight rise in shoplifting and purse thefts in the run up to Christmas and we are working proactively with local businesses and Shop Watch to keep shoppers safe.

“Our team will be out speaking to people visiting Ripley town centre, offering advice on crime prevention and reassuring them that shoplifting and retail related crime won’t be tolerated.”

One woman was arrested and charged for shoplifting in Ripley as a result of the Shop Watch radio link up.

Amber Value, on Church Street, used the system to report a suspicious female in the store at around 10.30am on Wednesday, November 20.

Michaela Stewart, 19, of Church Street, Riddings, was arrested and later charged with shoplifting from Amber Value and also from the Wilkinsons store in Ripley.

Ms Stewart was due to appear before magistrates in Chesterfield on Thursday, November 21.

She is now also being considered for a six month ban from entering stores who are signed up to the Shop Watch scheme across the Amber Valley.

Sergeant Dave Harrison, of the Amber Valley Community Safety Partnership, said: “The radio link allows businesses to quickly pass on the details of any incidents or suspicious activity to police and other shops.

“This incident demonstrates the value of Shop Watch, which put other retailers on their guard and alerted police to a potential offender.”

For more information about Shop Watch in the Amber Valley contact Sgt. Dave Harrison or Claire Bestwick of the Amber Valley Community Safety Partnership on 01773 841652 or email communitysafety@ambervalley.gov.uk.