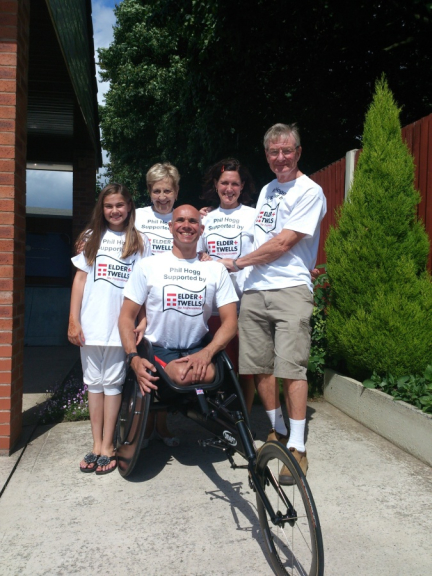 Heanor athlete Phil Hogg received a big boost to his campaign to get to the Rio Paralympics this weekend when local estate agents Elder & Twells presented him with a cheque for £500.

Paralysed in a cycling accident in 1991, Phil started playing wheelchair sport as part of his rehabilitation, and has been a regular in the GB Wheelchair Basketball team for many years. Since taking up the triathlon more recently, Phil was identified as one of only four men to go through to the Great Britain Paratriathlon Talent Program for Rio 2016, alongside fellow Marlpool resident Dave Ellis.

The donation is very important to Phil; despite having won both the European T1 ParaTriathlon Championship and the British T1 Paratriathlon Championship this year, he receives no formal funding for his training, and is relying on the generosity of local people and businesses to keep his Rio dream alive.  Equipment for this sport, which involves a 750metre swim, a 20km hand-bike ride and a 5km wheelchair sprint, is costly, with a hand bike costing anything between £7,000 and £11,000. The bikes and wheelchairs have to be specially made for each rider and can make a huge difference to the times, shaving up to 6 minutes off the overall times.

Making the presentation, Ian Elder said "Elder & Twells are pleased to support Phil and his fantastic efforts for the country and for this area. It's great to see how the whole community is getting behind him and we are proud to be able to contribute as well. We all wish him every success and look forward to following his progress and hopefully celebrating many more wins."

Accepting the cheque, Phil added, "We are overwhelmed by the support we've had from the people of Heanor. We're really close now to being able to order my new racing hand-bike. Bikes of the standard used in the top level competitions are usually tailor made to fit the rider - at the moment I'm using one borrowed from a fellow athlete who's 6'4". As I'm a full 4” shorter and a totally different build, you can understand how this isn't the best fit for me.  When I moved from a generic training bike to this current one I managed to knock 6 minutes off my time, so I'm really excited to see just how much faster I can go in a custom built bike of the type used by all the other guys I'm competing against."

Phil's supporters have been busy over the last few months organising many fundraising events to raise money towards the bike, including a leg waxing session at Heanor's Community Fair, a bootcamp fitness-a-thon and a fun run. The next event is a social night at Heanor Miners Welfare on the 9th August, followed by a football match between local youngsters and the police on Saturday 10th August.

Phil’s next race will be in the World Paratriathlon Championships in London from September 11th – 14th.