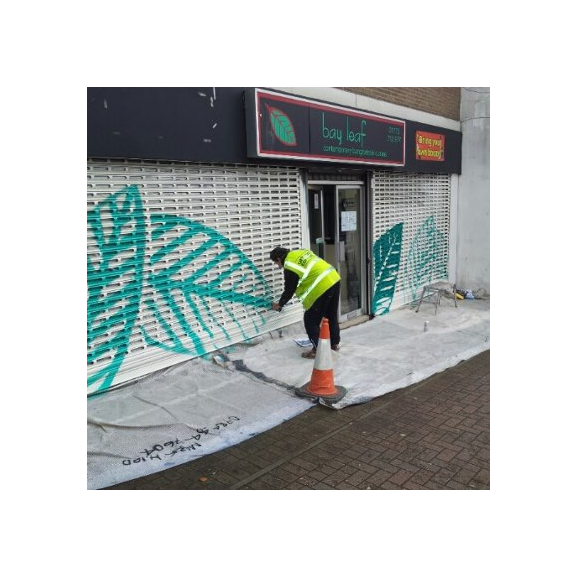 Have you seen the newly decorated shutter on the Indian Restaurant on Market Street in Heanor?

It's great to see someone taking the initiative and doing something to brighten the place up.

Apparently, the project was at least part funded by Amber Valley Borough Council, and this has caused quite a stir amongst local people.

Quite a few have suggested that the money could/should have been used to reduce the rents or rates in the town, helping current traders, or tempting new ones in. However, our understanding is that the budget used for this project is 'ringfenced' for this type of spend and cannot be used for anything else.

Given that, isn't it better that the money is used to cheer up drab shutters that remain closed during the day out of necessity?

Yes, we do have a problem in town with empty shops, and this is something that needs to be addressed as soon as possible, but this isn't one of them. This unit is actually a restaurant which is only used in the evenings. The nature of the restaurant trade means that it will never be open during the day and its shutters will always be down when many people are out and about. How great that the owners care enough about Heanor to make sure their shop will now look vibrant and colourful during the day as well as at night.

Our local vicar, Dan Pattimore, summed it up tonight on Facebook,

"When Mary Portas wrote her report on how to regenerate our high streets (which I can heartily recommend by the way) she made a very interesting assertion. Put simply it was this - You will not get economic regeneration without addressing community regeneration. In fact she goes as far as to say that unless you make an area a pleasant place to be any amount of economic regeneration will falter.

Think about it this way: if you go into Starbucks or Costa or wherever and buy a fancy cup of coffee for £3 you don't come out of the shop and wonder to yourself, "What have I just done? Spending £3 on a cup of coffee! That's madness!" Instead you have enjoyed the experience of buying the coffee; so much so that you probably wouldn't go back and complain if it was not hot enough, but you would go back and buy another at a later date. The atmosphere of a place is important.

Now painting shutters is not the complete answer, because actually community is a much more costly reality because it means we begin to put other people before ourselves and invest our lives for the benefit of all. However, painting shutters does go some way to improving the atmosphere, the look and feel of a place."

Yes there are bigger issues in Heanor, and in Ripley as well for that matter, but seemingly small projects like this can add up to make a huge difference.

Think small Cornish fishing towns, or Tobermory, the colourful inspiration for the children's TV programme, Balamory, with a strong theme around houses and shops painted a myriad of different bright colours.

We say let's have more projects like this and create a colourful interesting town that people feel good about visiting...