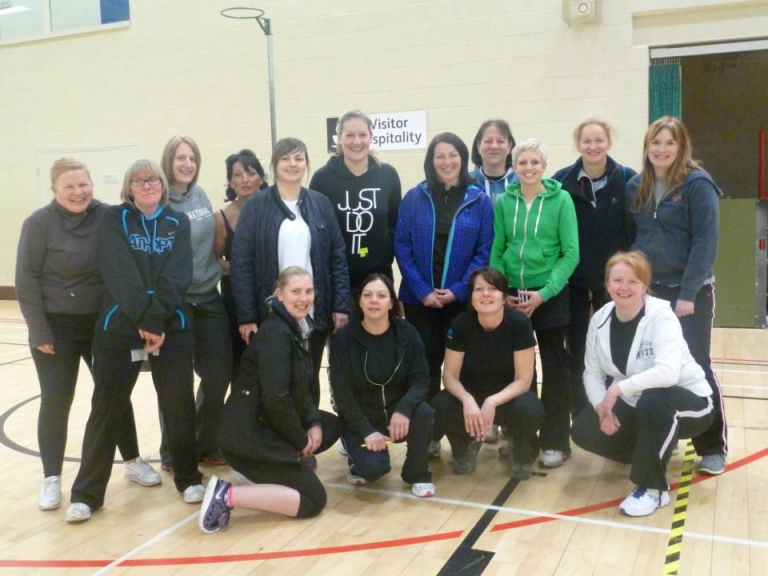 The pressure was on for the Angels on Wednesday night.  With something to prove and… well lets face it, not a lot to lose, they entered their third ‘Back 2 Netball’ tournament.  In fact, the Angels entered two teams aptly named Aldercar Angels 1 and 2.  Yes, we thought long and hard about that one.

After a bit of a slog through the Nottingham traffic, we arrived at Nottingham Trent University, did two turns around the campus and finally found the Lee Westwood sports centre.  We were ushered into a purpose built hall with all mod cons (loos and a drinks machine) these things are very important to us ladies!

Warmed up, we were welcomed and given a play list, along with notification that around the building Easter Eggs had been hidden for us to find.  Our Wing Attack, nearly missed the first match as she disappeared through the door, only returning when she had four of those eggs and Centre had to be pulled from the cricket nets by the ankles in her hunt for chocolate!

Our play list told us we were up first….against each other.  A very gracious and amicable match and at least the Angels had to win one match!  Angels 2 came out on top with 3 goals to 1 and this set us up for our next match against the favourites, Portland.  Not quite so gracious against Portland we gave them a run for their money and landed them with their worst score of the tournament with a one-all draw!  A few more games in and Angels 1 were putting the ball in the hoop too, managing draws and wins, ok and a couple of losses too.

Winning their next match against the ‘Misfits’ Angels 2 were on fire.  Then coach pipes up with ‘if you win all your matches now you have a chance of being up there with the favourites.’  No pressure there then!  Full of pearly wisdoms is our coach, but nevertheless we did as she suggested and cracked on with winning our next four games.

Our last match dawned and both Angels 1 and 2 were on court at the same time.  The pressure was on for Angels 2 against Stapleford Scorpions, we needed to win to be in there with Portland.  And yes, you can probably guess, this is where it started to fall apart.  Angels were firing on all four cylinders and that ball was going through the hoop!  The final score was 5-4.  Great you might think, a resounding success. Then a little creative umpiring occurred.  Scorpions managed to land our 5 goals and we ended up with their 4 goals. Team captain and coach were promptly dispatched to see the adjudicator!  A little while later and the two shooters went in for back up and even the scorpions there were confused.  The outcome…’Umpires decision is final!’ Now the normally gracious Angels were most unhappy about this decision.

Out of eight teams, the favourites, Portland topped the evening off with Angels 1 coming in 6th place.  Third place went to Angels 2, with a resounding cheer from all of us.  Second place went to, yes you can guess, the Stapleford Scorpions.  ‘Ladylike’ had, by this time, left the building and the applause was barely audible.

Now don’t get us wrong 6th and 3rd place is a marked improvement on last and ‘next to last’ and we are rightly chuffed to be going upwards but those Scorpions need to pay attention.  The Angels will return and next time the sting will be in our tail!

Charlie is a local resident. Having relocated from the South coast to the area some 18 years ago to study, she simply forgot to go back! Now an advocate for the local area, she can be found loitering...