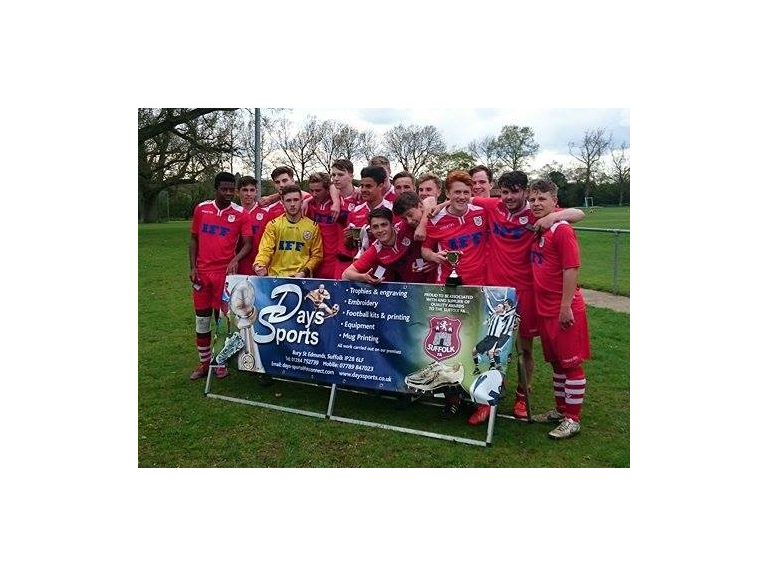 The young Haverhill Rovers travelled to Walsham Le Willows on Sunday in bid to win the U18 County Cup and were up against Woodbridge Town U18s who have experienced great success previously in this competition.

Rovers looked determined as they soon put their swift passing game into action and it was not long before they put the Woodbridge defence under pressure when a good through ball from Rhys Shulver found Tyrone Alleyne who brought a good save out of Woodbridge keeper. Rovers continued to dominate possession in all areas and Alleyne again caused Woodbridge problems when he beat the defence and was bought down in the box and a penalty given.

The impressive James Baughurst stepped up to take the kick but he was unable to beat the keeper who made a great save but it was the Ollie Stevenson who was first to react to the rebound as he fired that ball home to give Rovers a lead after just nine minutes.

Haverhill continued to have the upper hand as they played great football through the thirds starting from the back through the impressive back four of Shulver, Luff, Howard and Fish and a second goal soon followed when a pin-point Baughurst free kick delivery found Alleyne who scored with a superb diving header.

After this the Rovers pressure was relentless as Stevenson, Jebb and Alleyne all went close to increasing the lead before a stunning move between Healey, Baughurst and Jebb saw the ball fall to Stevenson who scored a slightly deflected shot to give Rovers a well-deserved three goal lead at the break.

The second half started as the first ended with Rovers on top and another stunning goal was soon to follow when Shulver played a great ball down the right to Jebb who crossed for Allenye to head home for his second goal of the game.

Rovers continued to control the game with the running of Healey and Tolosi being a constant threat but full credit to Woodbridge who defended well against their Rovers opponents to keep the score down to four to the final whistle.

As Rovers lifted the cup Club Chairman Ali Shulver commented “I was delighted with the performance of the youngsters as this is their fourth victory in seven days and today showed everyone here why we keep promoting our development pathway in such a big way.  The football was as good as you will see at this age and football in Haverhill should really be exiting in the future as we hopefully see these boys continue develop.”